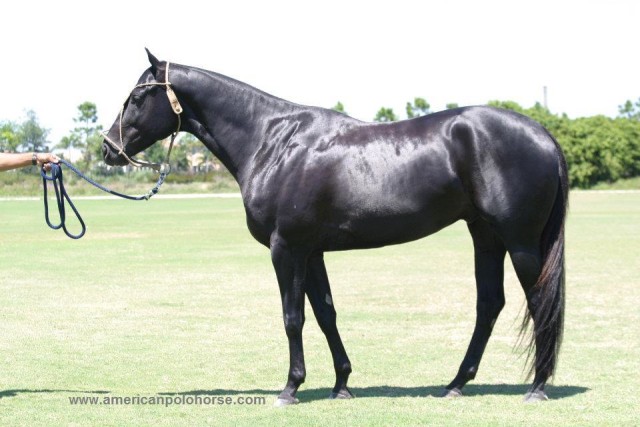 Sunny Hale has been dubbed the “the most famous female polo player in the world.” Amanda Uechi Ronan gets the scoop on three horses that helped her earn the title.

Sunny is widely recognized as the most accomplished and well respected female polo player in the world. She is the first woman in US History to win the prestigious US Open Polo Championships and has been competing alongside some of the greatest male players in the sport for over 20 seasons.  I recently had the chance to chat with Sunny about a few of her favorite horses, some bred for perfection and others rescued straight from the kill buyer auction house.

One of my breeding accomplishments I am most proud of is a black stallion I bred called “Wyatt Earp.” He is the son of one of my all time favorite Thoroughbred mares and his sire is a record holding racing quarter horse stallion who sired an All American Winner as well as many champion racehorses. His mother was literally the smartest horse I have ever come across and one of my favorite horses to play as she, literally, tried to think for you on the field and would give 1000% of herself every time. Wyatt possesses a lot of her qualities so I am really exited about him.

One horse who helped put me on the map was a black gelding named “Cognac” who was literally the fastest polo pony I have ever ridden and had the maneuverability of a 4-wheel drive Ferrari, built to overtake or shut down around any obstacle within inches at any speed. He was well known around the world for his abilities and sought after by all the top teams and players, but I never could sell him no matter what the offer – and there were some great ones and lots of pressure to do it – as those kind of horses only come around once in a lifetime and he was a true champion to the core.

What he possessed that was the most unique was the size of his heart and soul that he would put into our games together.

To any horseman, that is the ultimate connection to experience, it makes you feel invincible when the horse just becomes an extension of your thoughts but with 1,000 lb. of added torque. To anyone who has ever owned one of those, you know what I mean.

Another one of my absolute personal favorite horse stories is about a horse called “D’Jeat.” D’Jeat started as a Thoroughbred gelding ex-racehorse called “Castle Buzz” who was taken to a local auction that I loved to visit hunting for prospects.

I saw him and it was love at first sight, something in his eyes just said, “I am it.”

The most pure genuine soul just stared me down. His legs were perfect and very correct, built to stay together for a long time as an athlete. He was going to sell at probably 2 am in the morning and I was in, something in his eyes just said I’m your man. Sounds funny, but that was the truth, in fact if you would have seen what everyone else saw in his body shape you would have been laughing as hysterically as they were.

The local bi-weekly auction that I was at was not the pristine Kentucky TB farm sales. I was in a small Midwestern town where all of the last chance horses are dropped off or traded by some serious horse traders along with horses headed for slaughter. Well, he was on the wayside headed for the slaughter house and when the gate opened and he was led into the sales ring the entire audience of people and locals, who had come for the great country cooking in the restaurant down below and a night of entertainment, broke into laughter at the site of this 3 year old skinny tall gelding with a funny body. The first buyer’s hand that went up was for the slaughterhouse at a bid of $410 and as I offered $420, the slaughter buyer along with everyone else continued laughing as the hammer fell and I owned him. I was so happy! I thought I just stole a good one for sure!

I bought three horses that night and I was so excited to get them home and check them out in the morning. In the morning, I tied all three up to the tie rail to get a good look and another trainer stabled near me decided he wanted to get on them and try them out, so I said ok have at it see what you think. He jumped on the first two, one was a sharp dappled grey, the other a beautiful chestnut mare and the third was this tall skinny brown gelding. He rode the two fancy looking ones and said, “Wow, you really stole these!” and then disappeared … and did not mention the third horse, “Castle Buzz.” Everyone seemed to think the same thing. I decided to name him “D’Jeat,” which stood for “did you eat” from the popular Jeff Foxworthy redneck words to live by comedy routine as I thought it was funny.

D’Jeat went on to play the US Open Championships and every major tournament I played and became one of my most fun horses to play and most notable in the barn with the grooms and at the field. He not only gave his heart and soul when he played, he was well known for his barn antics such as untying himself and then going down the rail untying all of his friends.

There was no rope or knot he could not untie. He also used to take a bite of hay and then carry it to his water bucket to make soup … every meal, almost every bite, every day, one of the funniest things to watch. One of his other favorite tricks, after he untied himself was to go un-velcro all the drying Pro Choice boots that were attached to the wash racks or rails.

Everyone knew D’Jeat by his unique body structure and his hilarious character, but all jokes aside he was one of the most honest, comfortable and well-balanced horses I have ever ridden.

One of my all time favorite pictures is of us leaving Field One after the US Open and as I patted his neck for his amazing performance you can just see in the photo how proud of himself he was; he always showed it and I always felt it.

Special thanks to Sunny for talking horses with us!

Be sure and check out American Polo Horse Association for more information.