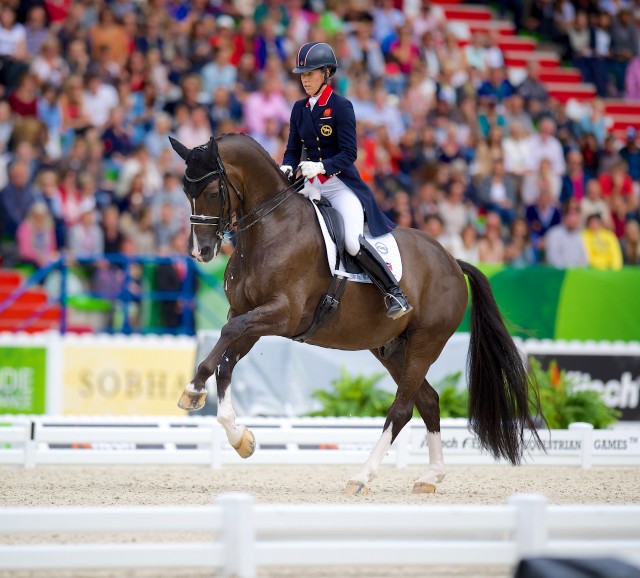 In some disappointing news this week, British superstar dressage pair Charlotte Dujardin and Valegro have withdrawn their entry from the $75,000 Dressage Freestyle class at the Central Park Horse Show. The show is scheduled for September 23-27 and has attracted a number of big names in equestrian sport to compete in New York City.

Charlotte and “Blueberry” are fresh off a very successful competition at the European Dressage Champsonships in Aachen last month, once again collecting a gold medal in the Grand Prix Special class as well as the Freestyle class. She has since announced that the horse, a 13-year-old Dutch Warmblood, will receive a longer break after his big weekend at Aachen rather than ask him to travel to the U.S.

“‘Blueberry’ is an amazing once-in-a-lifetime horse, and Carl [Hester] and I just want to ensure he gets a well-deserved rest after an intense and successful championship last month, as his health and happiness is our No. 1 priority,” Charlotte said in an interview with The Chronicle of the Horse.

Charlotte herself, however, will still be coming to the States for the Central Park Horse Show! Robert Dover will be sourcing her a horse to ride, exhibition style, while she is stateside, so her fans will still get to see 50% of the Charlotte/Blueberry duo!

While we’re disappointed Valegro won’t be accompanying Charlotte on her trip, we can definitely appreciate making decisions such as these for the best interest of our horses. For that we tip our hat — er, helmet? — to Charlotte, Carl Hester and the rest of Valegro’s connections.

We hope to see you soon, Valegro!