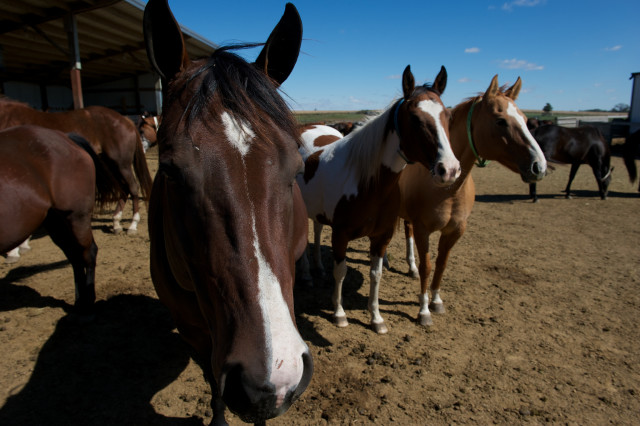 A reintroduced version of a bill that would outlaw the exportation of horses for slaughter is currently back in Congress. What are the implications for the horse industry?

This isn’t the first time that the Safeguard American Food Exports Act has been introduced in Congress: the bill was originally read in 2013 in the 113th Congress, but no further action was ever taken and so the bill died at the end of that session. In April of this year, the bill was reintroduced in the House of Representatives in the 114th Congress as H.R. 1942. The Safeguard American Food Exports (or SAFE) Act is simple, but has massive ramifications:

Amends the Federal Food, Drug, and Cosmetic Act to deem equine (horses and other members of the equidae family) parts to be an unsafe food additive or animal drug.

Prohibits the knowing sale or transport of equines or equine parts in interstate or foreign commerce for purposes of human consumption.

The 2015 version of the SAFE Act has 120 cosponsors, and Popvox polling shows that an overwhelming majority of users support the passing of H.R. 1942.

The science behind the SAFE Act

Labeling horses and other equines as unsafe for human consumption isn’t just an empty claim: because horses aren’t raised intentionally for meat but for competition, riding or companion careers, they are medicated as necessary — much like your dog or cat. Phenylbutazone or “bute,” as an example, is a common go-to anti-inflammatory prescribed for injuries minor or severe. You might have seen the warnings “should not be administered to horses intended for human consumption” on your bute, your wormers, or other pharmaceuticals. Most of us don’t give it a second thought: we administer the drugs our horses need for whatever reason and move on with our day.

Horses wind up in the slaughterhouse for various reasons, however tragic or unpredictable their circumstances might have been — in this regard, they’re not a “conventional” farmed livestock. In the beef, pork and chicken industries, animals may still be medicated for various reasons, but responsible farmers follow the proper withdrawal protocols for any administered drugs. In the horse slaughter industry, now limited to just Mexico and Canada in North America, there’s absolutely no documentation of what medicines a horse might have received or when they last received them.

So when horse meat is exported to other continents, consumers have no idea what chemicals could be contained within their dinner. Bute in particular has been recognized as a potent carcinogen in humans. Think of some of the externally-applied medicines that we might handle with gloves and face masks. Now imagine eating it. Obviously, few of us want to imagine eating horse meat in the first place — but when you consider the various drugs and chemicals that linger in a horse’s system, the process becomes downright dangerous.

The SAFE Act, recognizing the dangers of consuming horsemeat that could very likely contain a cocktail of poisonous-to-humans chemicals, seeks to outlaw the transport of horses between states and into foreign countries where slaughter is still legal — so in a roundabout way, ending the possibility that horses in America could wind up at a slaughterhouse.

A brief history of horse slaughter legislation in the US

The highlights of the legislative efforts to end horse slaughter are listed below. For a more detailed timeline, see this article from HorseChannel.com.

What is still legal at this point in time is the transport of horses outside of the US to slaughterhouses operating in Canada and Mexico. The SAFE Act would make this practice illegal.

So what does this mean for the horse industry?

Horse slaughter is a controversial subject with many outspoken advocates on both sides of the debate. Horses are cherished and respected more as a pet than as livestock in the US, though they are still considered livestock by law. We’ve all seen the heartbreaking images of unwanted horses going through the “kill sales,” destined for a foreign meat market. There are always worrying reports of stolen horses winding up at these sales as well.

So the potential outlawing of the slaughter of American horses should be a no-brainer, right? Yes … and no. While none of us like to imagine any horse going to slaughter, there is a frightening reality in this country that unwanted horses are everywhere: they’re overflowing the rescues, shelters and sanctuaries. They’re being turned loose to run feral on open land, leading to overgrazing and a slow death by starvation (federal holding sites for wild horses are already at capacity.)

I don’t really like thinking of horse slaughter as a “tidy end” to the unwanted horse problem, because it’s anything but tidy for the individual horses involved. Outlawing horse slaughter is just treating a symptom, not the root problem: there are too many horses and not enough safe, loving homes for them all.

I don’t profess to have a solution, but until the real problem is addressed, horses will continue to suffer. It’s our responsibility as horse lovers and horsemen to work together to find a true and lasting solution.

Weigh in, Horse Nation: what are your thoughts on the SAFE Act? Where do you think we need to make changes to solve the problem once and for all?