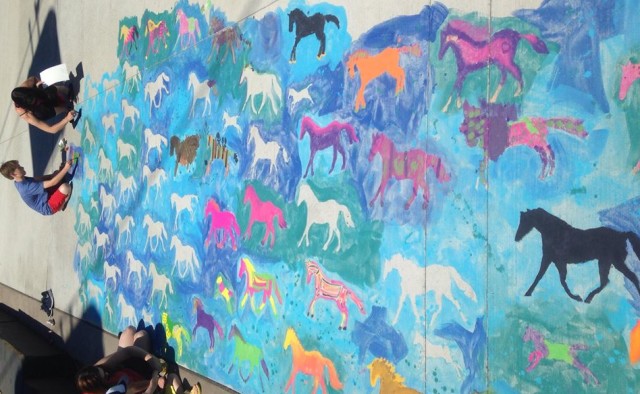 A temporary but painstakingly created community art project honors one of the Pacific Northwest’s most gruesome tragedies.

On this day, September 8, 1858 the Palouse Tribesmen of what is now Washington State looked across a horizon that just hours earlier had been the holding grounds of their beloved horses and saw one of the most devastating sights imaginable. The sounds of restless hooves and swishing tails had been replaced by agonizing silence when U.S. Army Colonel George Wright ordered the systematic destruction of the tribe’s entire herd. It’s estimated that between 800 to 1,000 horses were killed, and it had taken Wright’s men almost 2 whole days to complete the deed.

Members of the Palouse Tribe at the turn of the 20th Century. cc/wikipedia

According to primary documents, the act had been done as punishment for the “murder of white settlers.” The truth is more complicated; two prospectors had entered a territory of eastern Washington that they had been explicitly forbidden to enter by the U.S. government because of loose and ultimately hollow agreements with local tribes. Their entrance into this territory sparked a conflict and the prospectors were killed (it’s possible that Native Americans also died in this conflict, but there is no record of that. We do know that dozens of tribesmen had been killed in previous skirmishes with the invading Army that year.)

In retaliation, Colonel Wright ordered that the horses, as well as their feed and shelters, be destroyed. This kind of destruction was absolutely shattering to a Pacific Northwest tribe in that era. Horses were not only critical to transportation and hunting, but they were a tribe’s entire equity and social capital in the territory. Horses meant security, stature, and companionship, and the tribes affected by the slaughter (in addition to the Palouse horses, Coeur d’Alene and Spokane tribes’ horses were also killed) never fully recovered from this loss. In 1887, a conglomeration of the Pacific Northwest tribes ceded more than 3 million acres to the government for $0.32 an acre, and moved to a reservation in the northeast.

It was a dark and devastating chapter in American history, but this past summer, a Spokane artist named Ryan Feddersen attempted to provide peace, healing, and context to this event with a beautiful albeit fleeting art memorial in downtown Spokane.

The Memorial, “900 Horses” was created over several days not just by Feddersen, but with the help of Spokane residents and visitors. Outlines of 900 horses were laid out on a cement plaza in temporary paint, and citizens were invited to stop and paint a horse in the outlines to create a stunning rebirth of each horse lost in the tragedy. The results were a visually stunning and moving dedication to the horses and the tribes that loved them.

“Together, through concentrated attention on creating an effigy for each of the approximately 900 horses, the memorial will symbolically recognize the individual lives, the scale of the event, and its significance,” said Fedderson on her website, who herself is a descendant of the Arrow Lakes and Okanogan tribes of the Pacific Northwest.

The memorial has since been washed away by rain and foot traffic, but a dark event has been pulled from dusty histories and perhaps finally given a proper acknowledgement and place in our collective conscience.

Many thanks to Spokane Arts for their assistance with this story and for sharing their images with Horse Nation. You can read more about this event in an excellent article by the Spokesman, and more about the Palouse people, their horses, and their courageous fight to hold onto their territory in the book Renegade Tribe: The Palouse Indians and the invasion of the inland Pacific Northwest.