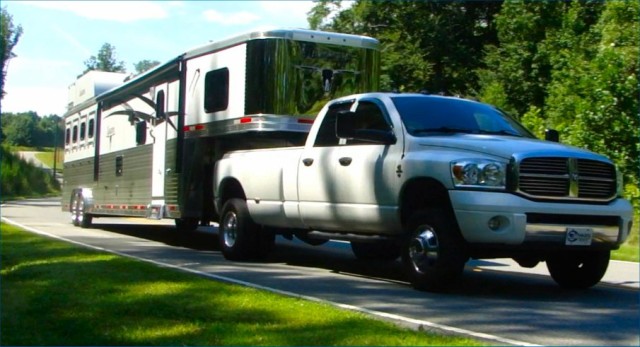 And also make you feel old: “Back in MY day, we had to back up our trailers the OLD-FASHIONED way!”

It doesn’t matter if you’re the biggest techno-geek in the world: there’s not much in the horse world that can really be too drastically improved by the latest technological marvel. Sure, we’ve adopted the GoPro for helmet-cam after helmet-cam, and downloaded about a billion smartphone apps that keep our horse’s records at our fingertips; our riding apparel and all of our horses’ gear is packed chock-full with the latest in moisture wicking, lightweight warmth or “smart” technologies … but at the end of the day, you still need to actually know a lot of stuff to take care of a horse well. No amount of technology will replace that.

And, at least for me, one of the biggest rites of passage in my development as a horseperson was learning how to drive a truck and trailer. Nothing gave a twenty-something me the true feeling of independence as hauling a big gooseneck down the road (even when sometimes those trips didn’t always go as planned.) I had to learn how to take a careful, wide turn, how to use my mirrors, and exactly how much stopping room a loaded truck and trailer needed (answer: a lot.) I practiced backing up a variety of vehicles and trailers until I could confidently back into a narrow driveway off a busy road and navigate a parking lot clearly designed for economy cars.

But these upcoming developments in the truck and SUV department? Yep. These could change everything.

You can adjust your side mirrors all you want to, but the truth of the matter is that large blind spots still exist when you’re pulling a trailer: smaller cars can “hide” and scare the heck out of you when you attempt to shift lanes (or worse.) Land Rover is developing a solution: mounting rear-facing cameras on the car and the trailer and transmitting those images to a computer screen in the rear-view mirror. A driver looking in the mirror can see the road behind him as though the trailer doesn’t exist.

Additionally, Land Rover is playing with technology that would allow you to monitor factors like trailer interior temperature and even visually check in on your cargo. While trailer cameras already exist, they’re an after-market addition that require a screen set up inside the truck as well as exterior antennas — Land Rover’s system would be built right into the vehicle.

Watch this video on The Scene.

Both of these technologies are still in the prototype stage, meaning that they’re not currently available on the market. There’s no word yet from Land Rover as to if or when these features might be available, but it’s an exciting concept to see in development.

I am not as sold on this idea as the “invisible trailer” concept … Ford has created a system as part of the electric power steering in the F-150 pickup called the “Pro Trailer Backup Assist.” Basically, you turn on the system, let go of the steering wheel and then turn the knob to put the trailer where you want it, allowing the truck to steer itself. (The punchy folks at Wired hilariously call it the “n00b knob.”)

The feature only works with bumper-pulls, but Ford assumes that most F-150 drivers won’t be pulling a gooseneck anyway. The truck does require a 10-minute process to “learn” the trailer, but the system can store up to 10 trailers which could be very useful if you’re hauling a variety of equipment. When in backup assist, the truck controls the steering, brakes and gas. The feature will be available on 2016 models at the end of this year.

Now, I think this is a pretty cool bit of technology … but part of my personal swagger that came from learning to drive a truck and trailer came from the ability to back the thing up and park it, especially when there happened to be a bunch of men standing around giving me the stink-eye. I feel like the backup assist takes all the fun out of it. But hey — I’m not judging. If the system helps people safely back their trailers with confidence, then it’s a boon to horse owners everywhere.

What do you think, Horse Nation? Are you looking forward to these new tools to help make your trailering a little easier? Or do you like things the old-fashioned way?