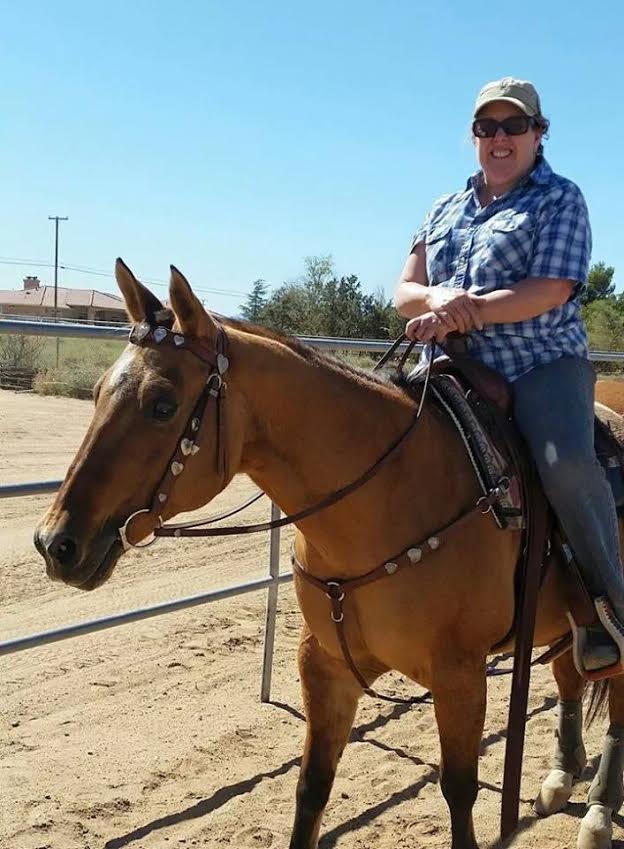 Becky Anderson is back in the saddle.

Becky Anderson and her American quarter horse, Princess. Prior to having deep brain stimulation surgery in 2014, Becky thought early onset Parkinson’s disease would keep her on the ground. Now the Hesperia, California resident is back in the saddle and doing what she loves. Photo courtesy of Becky Anderson.

Nearly every week you’ll find Becky Anderson where she loves to be — in the saddle. It’s an important part of her life that she doesn’t take for granted. A few years ago the onetime stablehand thought horseback riding was forever lost to her. In 2002, at 43 years of age, she learned she had young onset Parkinson’s disease and feared her riding days were over.

Anderson noticed subtle changes as far back as 1996, when she started having trouble double-clicking a computer mouse. In 2000 a doctor thought she had rheumatoid arthritis, but her symptoms were not a perfect match for that disease, and they continued to worsen. Two years later she was diagnosed with Parkinson’s and had to give up her fast-paced job as a restaurant manager.

“I was limping because my right leg wasn’t working right, and I wasn’t swinging my right arm,” says Becky, who started taking a variety of medications to try to regain control.

Ten years ago Anderson and her long-term partner Ron Torres decided to move from their Garden Grove home to the more rural Hesperia, where Anderson hoped she could reconnect with horses. She knew her erratic movements could spook a horse, and she discovered in a practice session that the loss of fine motor skills affected her ability to communicate with a horse.

“Horses feel very, very small motions. They can feel a fly walking across their back, or a finger on the reins. I could keep the horse cantering, but I couldn’t wiggle my fingers enough for him to feel that I wanted him to drop his head,” she recalls.

Still, riding a little bit seemed better than not riding at all, and the couple bought two quarter horse mares, Daisy, a palomino that was 8 at the time, and Princess, a 20-year-old buckskin.

“We worked with a quarter horse breeder in Corona, where I had worked as a teenager, and I knew she could find the perfect horse for me. I move kind of slow; I knew I would have to have an understanding horse that would do the same,” says Anderson, adding that she was able to ride less and less as time went by. Her motor symptoms – primarily stiffness, slowed walking and involuntary movements – increased even though she took several drugs six times a day.

“I was waking up at 2 o’clock in the morning and taking medicine because I couldn’t stand the rigid, locked feeling,” she says, adding that her neurologist eventually suggested she consider deep brain stimulation surgery, an option for some patients when drugs help but do not provide adequate control. Electrical leads are placed deep inside the brain, one on each side, and a pulse generator is positioned under the skin of the chest near the collarbone. A neurologist programs the device to provide electrical impulses to block abnormal nerve signals causing symptoms.

Anderson knew about DBS and was aware that only select hospitals provide it. When her insurer asked where she wanted to go for treatment, she chose Cedars-Sinai, in part because she was familiar with the name and reputation of Michele Tagliati, MD, director of the Movement Disorders Program in the Department of Neurology.

“Her initial symptoms 15 years earlier – dragging of a foot and reduced swinging of an arm – are very typical of patients with early onset Parkinson’s disease. Over time, she had increasing slowness and stiffness,” Tagliati says. “By the time we saw her, she was taking medications six times a day because they were wearing off after three hours and she was experiencing involuntary movements. She was an ideal candidate for DBS.”

Adam Mamelak, MD, director of the Functional Neurosurgery Program in the Department of Neurosurgery, implanted the electrical leads and pulse generator in July 2014. Tagliati programmed the device on July 25, making adjustments in August and October.

“She had very good improvement within three months, and she has very few motor symptoms now,” Tagliati says. The handful of drugs Anderson had to take repeatedly has been reduced to one pill three times a day.

Tagliati says that although the DBS wires and pulse generator can be delicate, he and Mamelak encourage patients to resume pastimes they enjoy.

“The only concern is to prevent the device from being damaged in any way,” he comments. “We usually advise against a contact sport, and it would be a good idea to wear a helmet when riding a horse. But technically, patients can do anything they want. That’s the whole purpose of doing DBS – so patients can go back to as normal mobility and activity as possible.”

Although DBS can improve movement symptoms, it does not address other aspects of Parkinson’s, such as fatigue, so on riding days, Anderson enlists Ron’s help to saddle and give her a hand with chores.

“DBS gave me the confidence to ride again. I don’t ride long, and our horses are used to my movements,” says Anderson, who likens the horses to big dogs that love to be petted and scratched. “They’re both really good to me, but they also depend on me to take care of them and give them attention. That keeps me going. Like my favorite song by Rascal Flatts, ‘Every Day’ you save my life. They do, every day.”