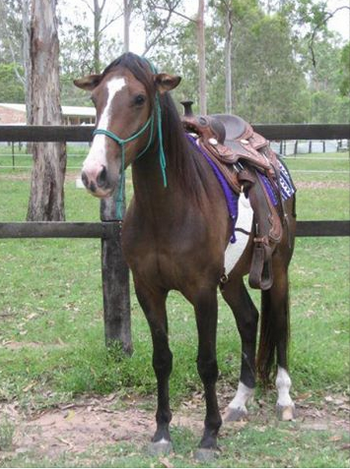 This horse pictured above has been making the social media rounds: he is an Australian Stock Horse gelding aptly named Eeyore. He was born with a birth defect that causes his ears to flop. Despite the condition, he is rideable and shows no signs of discomfort from his floppy ears.

What could cause this?

There are basically two reasons for a horse to have floppy ears: a congenital anomaly and trauma. If the ears are extremely floppy, symmetrical and have been that way since birth, there was probably poor development of the cartilage in the womb.

If the ears are asymmetrical and/or are a new development, then trauma should be suspected. A single droopy ear is usually a sign of paralysis of the seventh cranial nerve also known as the facial nerve.

The damaged nerve is outside the brain and usually not fatal. The Horse cited halter buckles as a common cause of nerve damage. While another website blamed ill fitting bridles.

WARNING: If the horse shows signs of ataxia (severe incoordination) a vet should be called immediately as ear drooping could be a symptom of severe brain trauma or EPM, equine protozoal myeloenecephalitis.

What can be done?

Truthfully, very little. A veterinarian should perform a basic neurological exam as well as test facial nerve motor function. Tests involve touching certain spots on the horse’s face and measuring a blink response. These tests will reveal complications of nerve damage such as blindness or inability to close the eyelid.

Can horses live with droopy ears?

Yes and very happily. Another Eeyore, this one hailing from Oregon, was an outcast Mustang when he terrorized a local 4-H reenactment group and was then listed for “immediate adoption” by the Forest Service and Bureau of Land Management. #truestory

Driesner then trained Eeyore for search and rescue as well as public outreach programs. “Eeyore can teach a lesson about the handicapped. What a message to kids who would pick on anyone different,” she said to the Itemizer-Observer.

Veterinarians and horse behaviorists noted, though, that a horse with droopy ears can have trouble living in a herd environment.  With most social cues coming from the position of ears, horses can misinterpret an “Eeyore” as an unfriendly. Special caution should be taken when making living arrangements for a floppy eared horse.