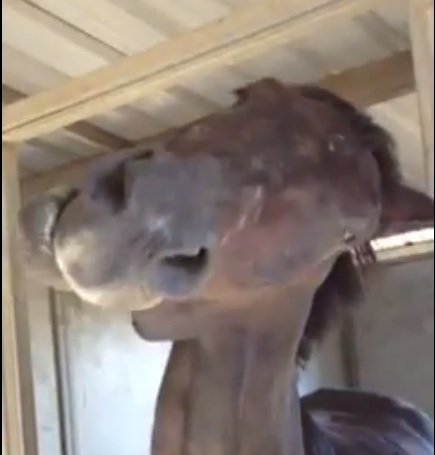 Meet Levi, a 14-year-old Oldenburg gelding who towers above us mere mortals at over 18.1 hands high. Despite his size, Levi is a gentle giant and a gigantic ham. Watch him unleash his inner giraffe while enjoying some neck scratches, and then pull his loyal human servant back for more. For size reference, the man who is scratching Levi’s neck is 6’2″.

Let’s take a closer look at that face:

Levi’s owner Janelle Dunn says, “Levi has the biggest heart and is the biggest goof of any horse I have ever known… he convinces people to pet him by making faces and ‘scooping you up,’ as we put it.” This video of Levi bonding with Janelle’s brother-in-law Tom has been exploding on Facebook, with over 5 million views in just a few days!

When he’s not busy charming people with his larger than life personality, Levi competes in dressage at Intermediare I and was the USDF Region 7 Fourth Level Musical Freestyle Champion in 2014. Janelle says that he is a joy to ride. “It is so fun to compete on him because he is such a showoff and he knows all eyes are on him!”

Janelle owns and operates Maxfield Equestrian in Turlock, CA with her husband Greg. We hope to see more of Levi’s antics, both in the show ring and hamming it up at home.