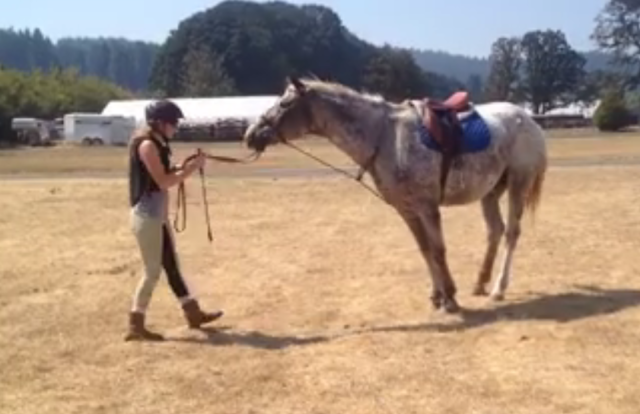 Zipper the former ranch horse seems to think he’s been hobbled … by his bell boots.

You can take the horse off the ranch, but you can never take the ranch out of the horse … or at least not for a few minutes, anyway. This cute video has been making the viral rounds of Facebook: (must be logged in to view.)

Poor guy … he figured it out in the end!

For a former ranch horse who may have worn hobbles while out on the range or on a multi-day excursion, he must have been awfully confused by the new devices being attached to his feet. Hobbles are most commonly used by working or trail riders who need their horses to stay put close to camp in a situation in which there is no corral or fenced-off pasture. They’re quite common among backcountry horsemen on long pack trips. Some types of hobbles are worn on the cannon bone while others are worn around the pastern. Zipper in the above video must have been used to the latter type.