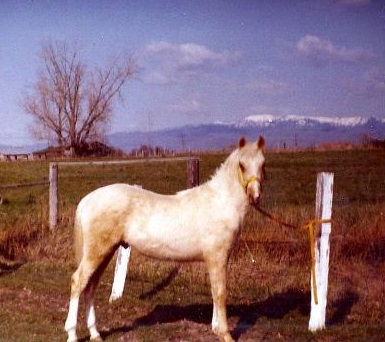 Liz Greene reflects on a girlhood wish that came true but stopped shy of a fairytale ending.

In many ways, I was like other little girls my age. I loved twirly dresses, Cabbage Patch Dolls and, of course, horses. Therefore, it was no surprise at all to my parents when, upon being perched upon Santa’s knee at age 5, I asked for a horse. The gentleman playing Santa that day gave a jolly laugh (no doubt why he got the part to begin with) and told me a horse would be awfully hard to fit in his sleigh.

I was undeterred. I was fully aware that Santa was magic and could get my horse into his sleigh if he wanted to — all I had to do was be really, really good. Apparently I outdid myself that year. On Christmas morning, mom led my brother and I out to the paddock behind my grandparents house. Standing there in the snow was a beautiful bay Quarter Horse. Her name was Pepper, and Santa had brought her just for us.

She was the most dazzling thing I’d ever seen. I immediately asked to go for a ride, but my mom told me we’d have to wait for a few weeks. They wanted to let her settle in.

I never did get to ride her.

Not Her First Rodeo

Mom went headfirst into the world of horses. Her parents bought a Buckskin Mustang — Princess — who eventually foaled Bonanza’s Little Joe. By and by, a palomino Morgan named Suzy and her baby, SJM Telstar, were added to the team. Mom raised the colts with loving care; her horses were her entire world.

But as so often happens, life got in the way. She got married, had a baby, got divorced, married again, had another baby (me!), and worked her tail off the entire time as an engineer for Mountain Bell/US West. She didn’t have the time necessary to spend with her horses — she was simply too busy. One by one, each horse was sold to a new owner.

Mom in her EhCapa gear and my grandfather and mom on her pony, Pal.

Pepper was always characterized as being a Christmas present for my brother and I — but my mother now admits that it was just a convenient excuse to get another horse for herself. Unfortunately for all of us, the whole experiment was a massive failure.

The first hint that something was wrong was spelled out plainly in the classified ad for Pepper. Buried among various other horses for sale was a registered Quarter Horse mare for $600. You know the old adage about if something seems too good to be true, it is? This was definitely one of those cases.

Dad said he had an inkling something was wrong when it took them over an hour to get Pepper in the trailer. He brushed it off though, thinking that perhaps it had simply been a long time since she’d been in one, or that maybe she smelled something in the trailer she didn’t like.

Pepper was a little skittish at first, but as she got used to her new home and the people around her, she became downright mean. She tried to bite anyone who came near her. If you walked into the paddock, she’d strike at you with her front legs. She would deliberately step on your feet.

My parents would always approach Pepper from the left, walk around her with their hands along her side, speaking to her the entire time. However, the moment they were behind her, she’d kick with full force. Dad said it was like she was waiting to kick you.

Mom tried to work with Pepper, but even leading her around the paddock was dangerous. After my brother took a kick to the stomach, mom knew it was time to let Pepper go. Things weren’t getting better, and she simply wasn’t safe to have around children.

They sold her to a local horse trader for $100. He promised to work with her, and if all else failed, he’d send her to a working cattle ranch where she’d be in good hands. It was a small consolation.

It’s not easy to admit defeat, but for the sake of our safety, my mother did just that. She also learned some valuable life lessons:

● She should have considered leasing a horse in order to make sure we were all ready for the commitment of horse ownership.

● Even an experienced rider can make mistakes when purchasing a horse. Mom should have taken Pepper out of the stall, led her around, and groomed and tacked her. If she had, she would have seen all of Pepper’s behavioral issues then.

● She should have learned how to curb Pepper’s aggressive behavior rather than just avoiding it.

● When she realized Pepper had behavioral issues, she should have considered hiring a trainer to help.

Pepper wasn’t a bad horse, she just didn’t respect my parents. In the end, I think it may have been a good thing that horse ownership didn’t work out for us. My parents were busy people, and my brother and I were too young to commute from home to the paddock alone. We weren’t in the right place to give Pepper the attention she needed.

I guess what I’m really getting at is that even though I was exceptionally good that year, Santa really shouldn’t have brought me a horse.

Liz Greene hails from the beautiful city of trees, Boise, Idaho. She’s a lover of all things geek and is happiest when cuddling with her dogs and catching up on the latest Marvel movies. You can follow her on Twitter @LizVGreene or delve deeper into her internal musings at InstantLo.