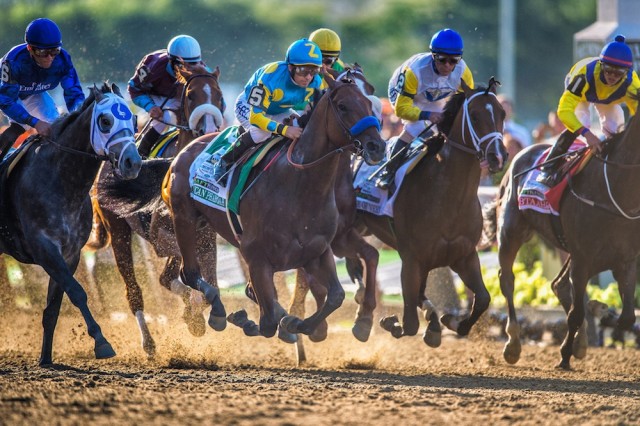 History repeated itself at the “Graveyard of Champions” when Keen Ice edged out the Triple Crown champion in Saturday’s big race. Check out the replay, and learn about all of the other champions who have been defeated at Saratoga.

American Pharoah at the start of the 2015 Belmont Stakes. Diana Robinson/Flickr/CC

Saratoga in the summer: the upstate New York track is famous as the oldest racecourse in the country, the summertime retreat for city dwellers from the Big Apple andthe home of the Travers Stakes, also called the “Midsummer Derby.” And on Saturday, August 29th, Saratoga lived up to its other claim to fame as the “Graveyard of Champions,” the place where winning streaks are broken and upsets rule the day.

The field for the Grade I Travers Stakes looked like a cast of ghosts from American Pharoah’s past, little echoes from the road to the Triple Crown: Upstart. Frammento. Keen Ice. Frosted. Tale of Verve. Texas Red, the juvenile champion that many were hoping to see start in the Derby but wasn’t ready, was locked and loaded. American Pharoah’s mere presence had booked Saratoga brimful with fans — an estimated 15,000 fans swarmed the track just to watch his workout a few days prior. As the gates clattered open, the track roared.

It should be noted that Frosted, who jumped right up with American Pharoah to battle for the lead, was ridden not by his usual jockey Joel Rosario but a last-minute substitute, Jose Lezcano. Rosario had fallen from his mount in an undercard race just an hour before the Travers was set to run and was hospitalized, forcing trainer Kiaran McLaughlin to find another rider. McLaughlin mentioned in an interview with Blood-Horse that he was not expecting to see his colt pressure Victor Espinoza and American Pharoah in the way the race played out. Regardless, the dual between these two horses ultimately created the perfect storm to allow Keen Ice to swoop forward and challenge the exhausted leaders.

In a press conference immediately after the race, a shocked Ahmed Zayat, American Pharoah’s owner, stated “My gut feeling right now, without being outspoken, is to retire him.” Rumors immediately began to swirl that the great Triple Crown champion was headed to retirement. However, on Sunday in a second interview, trainer Bob Baffert assuaged fears, mentioning that “we were all pretty disappointed. We were like in shock. We were surprised he got beat. We weren’t really prepared for a losing speech. When we hit it, it was like, we’ve just got to get through this. Basically, we’ll let the horse tell us what he’s doing.”

That’s been the plan for the Pharoah camp all summer long after the grueling Triple Crown campaign — see how the colt is doing, and go from there. The long-term plan has always had the Breeders Cup Classic in mind, though not yet set in stone; afterwards, the horse will retire to stud. All that remains now is to see what happens next.

Baffert added, “[Zayat] brought him up here. You really have to thank him. He wanted to share him. He’s a sportsman for bringing him up here and sharing him with Saratoga. He did it for racing and it didn’t work out. He rolled the dice and it didn’t work out, but he almost pulled it off. (American Pharoah) was just valiant in defeat and he was trying so hard. He was empty, empty, at the top of the stretch and he was still trying to win. I still thought there was a chance.”

As with any high-profile equine athlete, it’s easy for us as spectators to draw our own conclusions based merely on the video and photos we can see. While browsing Facebook this weekend, I saw comments ranging from “well, I knew the horse didn’t look right before they even loaded him into the gate”  to “the owners are greedy, just chasing purses.” While American Pharoah has, in a way, become America’s horse for what he’s done for horse racing, keep in mind that the horses’s connections are professionals and they have the horse’s best interests at heart. We wouldn’t ask someone else to judge how our horse’s entire life is being managed from looking at a two-minute video, so we as a horse-loving public shouldn’t try to assume anything about this great racehorse either.

Public opinion is a fickle thing — if the Zayats continue to race American Pharoah through the end of his three-year-old season, there will be plenty of critics who state that they are trying to capitalize on their great horse and make as much money as possible. And if they had decided to retire him after the Belmont Stakes, there would be a crowd of critics stating exactly the same thing.

Here are a few other champions who fell victim to Saratoga, the “graveyard of champions:”