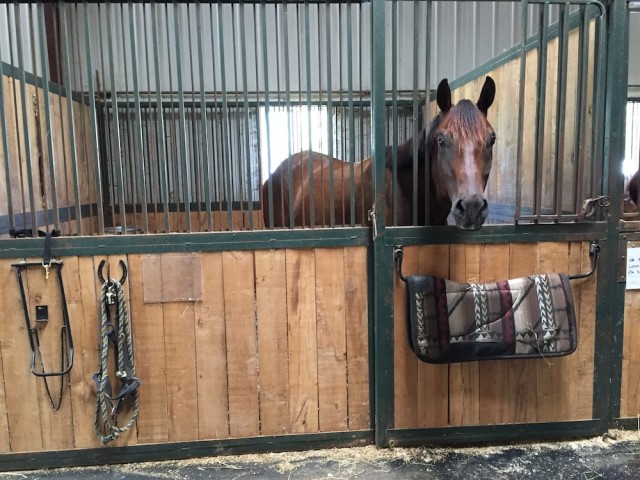 It’s almost been two weeks since my horse and I have moved into college, I into a cramped dorm room and he into a roomy stall with daily turnout. His food is delivered straight to his stall morning, noon, and night, and his water bucket refills automatically. I, on the other hand, have to walk way too far (uphill both directions, in the rain usually, etc.) to a dining hall where I receive meager portions of generally unsatisfying cafeteria-style food. Mom, thank you for all the home-cooked meals I never truly appreciated before.

Other than the usual minor grievances of a college freshman, all is well: my classes are mostly simultaneously fun and challenging, and most importantly of all, my horse seems to love it here.

By all accounts, everyone agrees that he is adorable, with the exception of the barn cat Grace, who does not seem to appreciate his nosiness (not that it stopped him from being nosy). He enjoys the activity in the barn, and has made friends with all of his neighbors (and all their neighbors, and anyone, horse or human, who walks by his stall). He’s thoroughly enjoyed looking at himself in the mirrors that line the indoor arena, and it’s been suggested that I get him a small mirror for his stall so that he can have the viewing pleasure of his own company at all times.

At this point, only a few others have worked with him, with mixed but increasingly positive results. Confusion is really the only thing I can accuse him of when others are riding, which I’m sure will be alleviated when he adjusts to multiple people riding him rather than just me. There was one particular instance earlier in the week in which one of my friends on the team was assigned to ride him, and little did she know she was the first person besides me to ride him at Alfred. I gave her some tips and off they went, Cricket cheerfully heading off with his new rider. All was smooth sailing until I tried to explain to her his cue to stop–when I was working with him to get him to stop nicely, I was simultaneously taking lessons on reining horses and struggling to sit deep enough and assume the correct position to achieve a sliding stop, and so consequently I worked at it and began to sit like a reiner to stop Cricket.

Their first few attempts to stop were a little rough and ended with both of them twenty feet past where they had intended to stop, looking at me with bewildered expressions (“Mom, what is she doing?!” and “Haley, I thought you said he’d stop if I said ‘whoa’!). However, with some adjustments on both of their parts, they ended up figuring it out and managing to stop where they meant to: a learning experience for both of them.

With upcoming tryouts for the IHSA team, I’m sure next week will bring more opportunities for improvement for both Cricket and me, and it will be interesting to see where we will fit into the program!