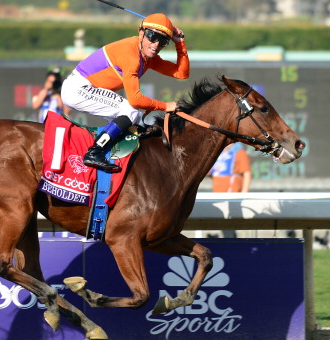 Is this mare a match for the Triple Crown winner?

Beholder is a 5-year-old mare who first put herself on the map by winning the 2012 Breeders Cup Juvenile Fillies. She ran second in the Kentucky Oaks in 2013 and then went on to win the Breeders Cup Distaff that year. Since then, she’s only lost one race and now she may be headed for the Breeders Cup Classic after beating the boys in the Pacific Classic this past weekend.

She literally just cantered away with that victory. Now, the public (and many members of the media) are speculating about the potential match-up between this star mare and “America’s Horse”.

American Pharoah will contest the Travers this weekend, and his connections have said the Classic in October is a possibility. Many other top horses are aiming for the Breeders Cup this year, which means it will likely be a star-studded roster.

Beholder ran her 1 1/4 mile in the Pacific Classic in 1:59.77, quite a bit faster than Pharoah’s time for the same distance (2:03.02 for the Derby). Should this time difference play a big factor into picking the winner of an eventual match? Sure, but we also need to take into account the track surface, the amount of traffic, and many other factors. But — the fact remains that this is a speedy little mare, and one who may easily toy with her competitors in the Classic.

What do you think HN? Can Beholder present a big challenge for our Triple Crown winner?