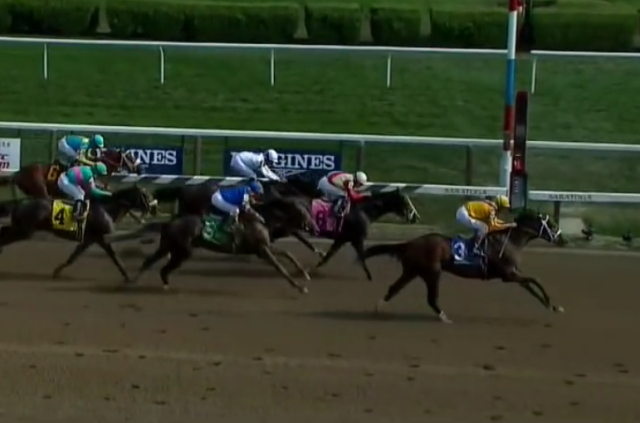 The great racing mare Rachel Alexandra is two for two with her offspring both winning their debut races! Take a look at her three-year-old colt Jess’s Dream at Saratoga.

It may have taken him a little longer to make it to the track, but watching Jess’s Dream break his maiden in a heart-stopping late-closing effort was definitely worth the wait.

The much-anticipated pairing of the 2007 and 2008 Horse of the Year Curlin and the 2009 Horse of the Year Rachel Alexandra, Jess’s Dream was foaled in 2012 and named for the owner of both parents, Jess Jackson. Jackson tragically passed away before he could see his pairing come to fruition.

While the racing world waited with breath held to see Jess’s Dream head to the track, it had to wait longer than expected: the colt simply wasn’t ready as a two-year-old, and was also delayed by an injury. Even at the beginning of the race, pokey out of the gate under John Velazquez, it looked like perhaps the dream would have to wait a little longer. But watch the full replay and see for yourself how the colt rallied for a last-minute dive to the wire:

Jess’s Dream is so far behind for the first half of the race that he doesn’t even show up in the race frame! As a green colt in his first-ever start, he of course has plenty to learn about racing — but it’s quite clear that the talent is certainly present and only needs to be honed.

Velazquez described the race for Blood-Horse: “I broke today and left him alone until he was ready. At the half-mile pole I started getting after him and he started catching up to horses. Once he caught up to the group, he knew it was time to run.”

Said trainer Kiaran McLaughlin about the race atmosphere as Jess’s Dream received applause from the crowd in the winner’s circle: “It was like a grade I. It was pretty special because of who it is, and listening to the fans clap. It’s great to win here at Saratoga with this horse because they appreciate him.”

Jess’s Dream’s half-sister, a two-year-old by Bernardini, also won her maiden a few weeks ago. Kudos to Rachel Alexandra, not only a star on the track but also in the broodmare barn!