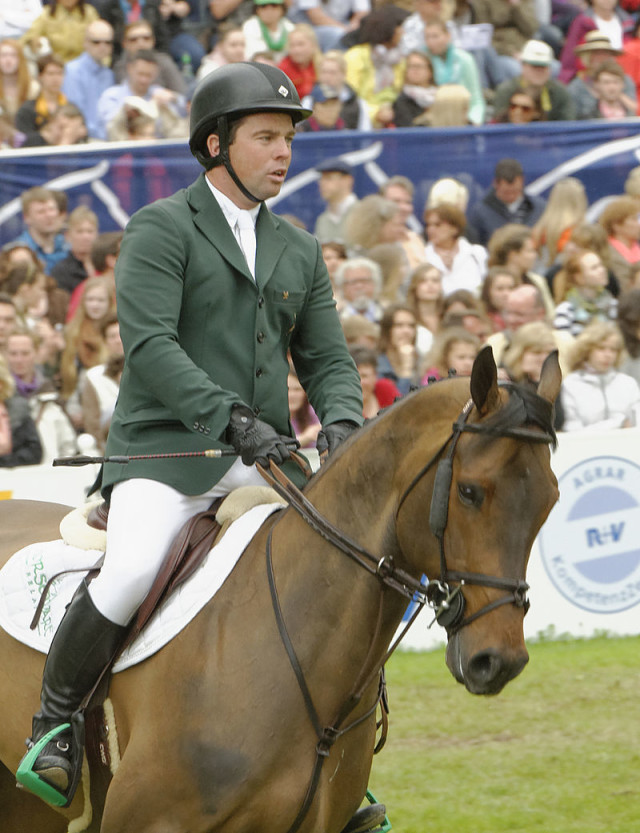 Watch the video and decide if Cian O’Connor has a case.

The hot story coming out of the FEI European Championships at Aachen this weekend surrounds Irish rider Cian O’Connor, who has lodged an appeal after he says a member of the jump crew cost him a rail at the 11th fence on course. That rail proved to be extremely costly, moving Ireland down in the final standings and, as a result, losing their qualification for the 2016 Olympics in Rio de Janiero.

Here is the only video we could find of the incident. If anyone has a lead on a better quality video, please let us know!

Here are our observations:

The jump crew member runs across the upcoming path of the Cian and Good Luck as they are approaching their turn towards fence 11. While the quality is not clear, from what we can tell, there wasn’t a big spook or look on the part of Good Luck at the moment of interruption.

After the jump crew member is safely out of the way, the horse and rider take another 12 strides to present to fence 11. From what it appears, the turn to fence 11 was not affected by the distraction — but once again, the video quality makes it hard to see much detail.

At no point does it really appear that Cian or Good Luck are off balance or out of sync. It’s hard to tell exactly how the rail came down, but it appears Good Luck hit it with his front legs but otherwise approached the jump fine.

Here’s another brief look at what happened:

Naturally, Cian was furious after completing his round and immediately lodged a complaint citing interference. His appeal was immediately rejected by the Ground Jury, who stated that the rider had the option to pull up if he felt his round had been sacrificed.

The FEI released the following statement concerning the incident: “The protest was heard by the Ground Jury, who ruled that as the athlete had continued his round, they saw no reason to stop him by ringing the bell. Under Article 233.3 of the FEI Jumping Rules, the athlete had the opportunity to stop voluntarily due to unforeseen circumstances beyond his control, however he did not do so.

The Ground Jury heard explanations from Robert Splaine and Cian O’Connor, reviewed video footage of the incident, and ruled that the result would stand.

Cian O’Connor and the Irish team have not taken no for an answer yet, and have declared that they plan to continue to seek other options for appealing the decision and results of the qualifier. According to Noelle Floyd, Horse Sport Ireland is currently in the process of trying to get the case before the FEI Tribunal before continuing on to other forms of action.

As it stands now, however, it appears the Ireland is out of the running for a team spot in Brazil next summer — a very odd notion if nothing else.

So now we pass the discussion along to you. After reviewing the video and making your own observations, do you feel Cian and Team Ireland have a case against the Ground Jury, or do you think the original decision should be upheld? Discuss!