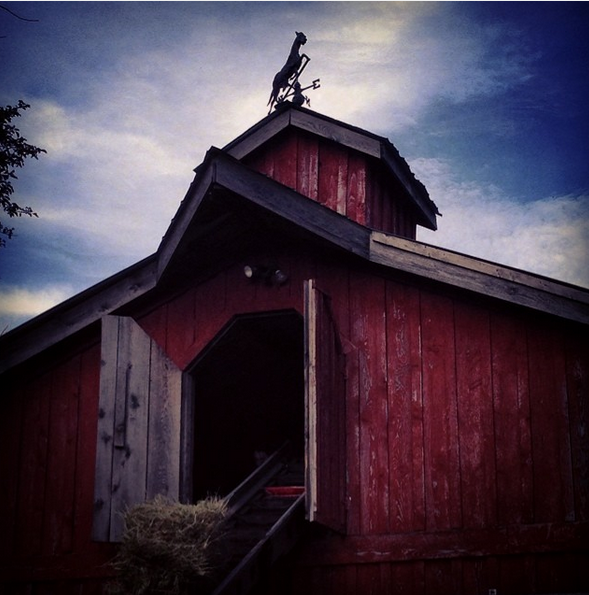 … the HAY elevator, that is.

Ah, summer: while the rest of the world is livin’ it up on the beach or the lake with an umbrella drink, we equestrians are busting our humps to stuff the loft with plenty of hay to get us through the winter. Our clothing is full of chaff; our eyes are full of dust. We hear the constant rumble of the tractor and the rickety rattle of the hay elevator in our sleep.

The hay elevator never ceases to be a source of amusement for me, whether I’m up in the loft welcoming the endless procession of ascending bales or at the bottom slinging them off the wagon. There’s something just comical about the steadily-spaced parade of bales slowly chugging their way heavenward … or perhaps I’ve just been stacking too much hay in the summer heat and have driven myself mad. Regardless, I’m sure that these common occurrences at the hay elevator will be easily recognizable to anyone who’s spent a summer in the loft.

That bale that tipped backwards and is somehow falling at the exact same speed that the elevator is moving, creating an endless tumbling effect. It’s hypnotizing, until the perpetual motion bale crashes into the bale behind it and everything falls off the elevator.

Everything’s going well, you’ve hit a good rhythm, the hay wagon is emptying steadily and the loft is filling with beautiful neat stacks, and then it happens: you pick up a bale, the strings snap or slip off, and poof! Hay explosion.

A close relative of the explosive bale, this bale is a modern miracle. It’s amazing that it somehow made it through the kick baler, got chucked into the back of the wagon, hauled to the barn, tumbled off the stack and wound up here, where we’re carefully trying to shimmy it onto the elevator and send it to the poor fool up in the loft who will undoubtedly curse our names when they have to try to stack it.

In your haste, you load this bale just slightly crooked at the bottom, and it slowly tips further and further over as it rides the elevator all the way up to the very top, where it finally succumbs to gravity and falls all the way to the ground mere inches from the hayloft.

They all came from the same hay field … why does this one weigh thirty pounds more than the last one? Oh, maybe it’s because it’s bale #267 from wagon #4. That might have something to do with it.

The only thing better than putting your hand on a dessicated, flattened snake that got baled up with the hay is putting your hand on a live one. Fun story: I once unwittingly picked up a bale with a snake on top of it and handed it down to my grandfather-in-law who unwittingly loaded it onto the elevator, sending the snake-bale to my sister-in-law in the hayloft who reached out, grabbed the bale, saw the snake and flung the whole thing back out the loft window in one swift movement.

No matter how tired you are, no matter how much hay dust you’ve inhaled or how many tiny cuts you have crisscrossing your hands and arms, you can’t resist spiking this bale down on the hay elevator, yelling “LAST BALE” to your compatriot in the loft, and waiting for that glorious moment when you can finally unplug the hay elevator and lay down on the grass in the glorious, echoing silence.

Have any bales that didn’t make the list? Leave your ideas in the comments section!