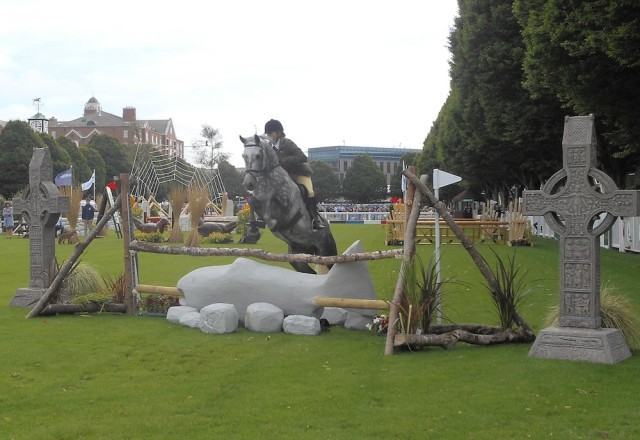 Where’s the fun in a vacation without horses? Contributing writer Eileen Cody gives us a play-by-play of her recent one-day jaunt in Ireland.

As luck would have it, my last full day in Ireland on my far-too-short visit to the British Isles happened to coincide with the first day of the Dublin Horse Show. So, as any good horse girl would, I abandoned all of my more touristy plans and bought myself a ticket.

I was a few days too early to catch the biggest international competitions in the main stadium, but the class lineup for the day in the other arenas more than made up for it. I arrived just in time for the performance Irish Draught class, which consisted of a simple flatwork pattern followed by a style hunter course and finishing with a conformation assessment, the scores for all three of which were combined into the horse’s final score.

Can I fit this in my carry-on?

It probably goes without saying that the Irish really know how to produce horses – these animals were truly impressive to watch. I was mesmerized by round after beautiful, rhythmic round, and while a good portion of the crowd headed inside to the vendor booths when the weather took a turn for the Irish, I couldn’t tear myself away from the rail, where I barely noticed the rain for the vibrations in the earth and the breeze on my face as each entry galloped past me to finish their trip. These horses were just so cool.

Of course, it also became apparent pretty quickly that horses will be horses no matter what country you’re in (read: they’re idiots). The surprise monkey wrench on course turned out to be a fairly innocuous natural rail oxer, sandwiched by a little donkey pulling a cart on one side and a cow on the other. Many of the obstacles were animal-themed, and sure, a few of them would have probably backed me right off, especially in a hunter course – the massive spider in a keyhole-style web, for instance, had me taking a second look even as a spectator. Not an eye was blinked at the sheepdog and/or his sheeply charges, the chickens perched on a wall, a mildly creepy stone fish, or a skinny over a giant wooden bird. And the spider so big it makes the forest-dwelling monsters from Harry Potter look like house pests? Best day ever!

But wait. Hold up there, mister course designer.

You want me to jump with that thing watching me?

(Horses are so great.)

The Connemara performance hunters were up next, which easily ranked among one of the cutest freaking things I’ve ever witnessed, second maybe to those tiny child jockeys racing Shetland ponies, or that video of the sneezing baby panda. Maybe. They ran on the same format as the Irish draft horse classes at a slightly lower height, a significantly higher adorable factor, and considerably less color diversity (seriously, EL James has nothing on the shades of gray at the Dublin Horse Show).

Sensing a pattern yet?

I probably could have watched these little jumping machines all day and been completely satisfied, but I was pretty sure my poorly-contained squealing was starting to get on the nerves of the stoic British couple next to me, so I took a break to check out the rest of the show grounds. In my distraction over wee ponies, I realized that I’d completely missed most of the first international competition in the main arena… worth it.

After catching the last few rounds of that, I wandered through the vendor fair for a while, making sure to stop by the BUA booth to check out the new saddle that everyone in the building was talking about.

And, okay, looks aside – I may own my fair share of equestrian bling, but I don’t see myself sitting on a red patent leather saddle anytime soon – I almost can’t believe no one has come up with this sooner. It’s incredibly comfortable to sit on, and the shock absorption built into the cantilevered design seems like it would do wonders for a horse’s back. As much as my inner George Morris is all for the timeless look of a traditional leather saddle, it’s amazing that it’s taken this long for tack design to catch up with all that modern technology has to offer. Let’s get behind this, people.

By the time I made it out of the vendor area (my wallet mostly unscathed, thankfully, due to the size restrictions of my carry-on luggage,) it was just about time to snag a good spot on the rail for the main event of the afternoon: the Irish Sports Council Classic. My American pride kicked into high gear as Kent Farrington, Lucy Davis, Georgina Bloomberg, and Charlie Jayne sailed over the course in turn (Georgina and her mount, Caleno 3, had the only clear first round of the Team USA contingent and went clear again in the second round to finish sixth), but the real stars of the afternoon for me were the spectators themselves. As a general rule, the Irish are a pretty enthusiastic people, but the atmosphere even in a less-than-halfway-filled stadium when their own Dermott Lennon flew around the second-round course to take the early lead was absolutely electric. And when the last rider crossed the finish flags, falling just short of Lennon’s time… well, it was a damn good day to be Irish, for sure.