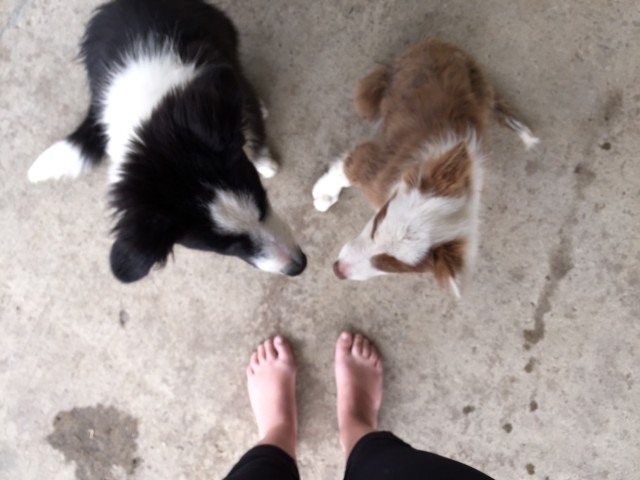 The hardest part of farm sitting? Not the horses.

This last week before I went off to college, I found myself house-, barn-, dog-, cat-, chicken-, and horse-sitting for my “adopted” family. I visited them before they left for vacation so that they could walk me through their daily routine for chores, and I was admittedly nervous when I left that I would remember everything as far as the horses’ turnout and feed despite their being written out in detail on each stall. Of the dogs, two puppies and one aging border collie, I was most concerned with the older dog’s schedule and medicines. Even the chickens and guinea hens were a source of stress when I realized that I had forgotten to count them the first day and thus didn’t know how many were supposed to be in the coop at night (apologies to any of the silly birds I may have locked outside — come back before dark next time).

The puppies, two deceptively adorable border collie siblings named Molly and Vincent, were what I thought would be the most fun and simplest part of the entire job. They would frolic and keep themselves entertained while I fed the horses, and they would cuddle with me on the couch before I went to bed — right? I counted myself as a veritable expert on puppy behavior; after all, my dog had been a puppy five short years ago and she hadn’t ever caused any significant problems.

I could not have been more wrong. The “little monsters,” as I have affectionately taken to calling them, have caused the most trouble out of any creature here. I was clued in to their behavior my very first night here, when I was sitting on the couch reading a book while they growled and wrestled on the floor behind me. Without any warning or reason that I could discern, they simultaneously leaped up onto the couch and ambushed me with a nearly lethal dose of puppy slobber to the face. I managed to fend them off and wrestle them down into a sitting position on the couch rather than on top of me, at which point Vincent proceeded to growl at Molly because she was receiving more attention than he was. This evolved into a full-fledged puppy war, and they tumbled off the couch.

Later that night, I went upstairs to get ready for bed and was trailed by the two silly things, and Vincent turned towards another room and proceeded to growl and bark into the dark space. He went inside, yelped once and then growled with increased ferocity. It being after dark, in an unfamiliar house, I was nervous — armed with my phone’s flashlight and clutching a hardcover book, I ventured into the room … only to find Vinny barking for all he was worth at his reflection in the mirror.

In the morning, we ventured out to the barn to take care of the horses. They get turned out at night, so I put grain and hay in their stalls and went out to the pasture to bring them in. Vinny and Molly trailed me, stalking and pouncing on each other all the way (it’s a wonder they ever get anywhere with how much they play and wrestle). They showed little interest in the horses until I put a lead rope around one of the mares’ necks, at which point Vincent came flying out of nowhere to jump up and bite her on the nose while Molly nipped at her heels. The mare pinned her ears back and came at Vinny, who promptly cowered and hid behind my legs. No one was hurt in the exchange, but the puppies got locked inside the grain room for the rest of the time.

When we returned inside, I busied myself preparing my breakfast and feeding the older dog, who looked on at the whole spectacle with a sort of bemused exasperation. The puppies, meanwhile, had dragged one of my muck boots (the heavy waterproof winter kind) into the living room. I heard them tearing at something and went to investigate, only to find them taking turns chewing a hole through the inside calf section of the boot. They saw my expression and turned baleful puppy eyes towards me, and then furtively kept chewing. I snatched my boot away from them, and then they had the good sense to at least look ashamed. From then on, I stashed my boots between the other shoes in the mudroom, and the little monsters left them well enough alone.

The following day, I decided to take the puppies to my house for a little while. Their owner had told me that one of them got carsick, so I lined the entire backseat of my car with beach towels, put their kennels in, and hoped for the best. We survived the hour-long ride home with no trouble, except for the anticipated puppy antics and barking at the cow pasture we passed on the highway. Upon arrival, I introduced them to my dog, Aly, and they were impressively ferocious at first but settled into an uneasy alliance. The puppies’ bond was evident — every time Aly jumped at them and tried to play, Molly would snap at her and then run and hide behind Vinny, who would crouch down playfully and dutifully growl back. They were also very attentive when it came to telling them “come” — at their home, they had selective hearing and would usually come, but it would be delayed. At my house, if I called one, all the dogs came running, which usually caused either a collision or a growling match to see which dog had the right to sit at my feet with the others crowding around.

We drove back home peacefully, and (thankfully) the puppies were exhausted. They curled up next to me on the couch for a while, then walked sedately to the mudroom to go in their kennels. Vinny, at that point, apparently experienced a burst of energy, because he barked with renewed vigor at the outside door. I let them both out for a few minutes, and when they came in Vincent wasted no time in squatting and peeing on the floor. Thoroughly exasperated, I put the silly things in their kennels, cleaned the floor, and went to bed.

Saying goodbye to the pups the next day was something of a relief, but I know that a part of me will miss their antics. It was an extraordinarily busy week, but one that was equally enjoyable.