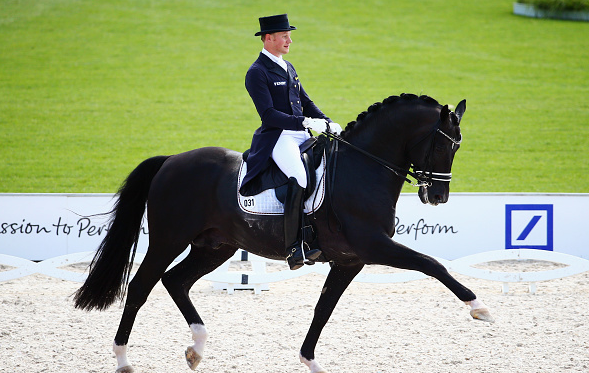 The Dutch Warmblood stallion will be retired at the age of 15.

One of the most iconic dressage horses of this era will no longer compete, according to a report on Horse & Hound this morning. The 15-year-old Dutch Warmblood stallion owned by Ann-Katrin Linsenhof, Paul Schockemöhle and the Rath family and ridden by Matthias Rath was most recently withdrawn from competition at Aachen this past weekend after displaying some unevenness behind.

After subsequent examination, Totilas was found to have a bone edema and was withdrawn from the next phase of competition, the Grand Prix Special.

The owners have released the following statement regarding Totilas’ retirement:

“As already known from various sources, the examination last weekend showed that Totilas has an edema in the bone. This is being treated in the best possible way by a superb team of veterinarians. Resulting form this new injury we collectively came to the decision against the active sport. Totilas will not come back into the competitive dressage sport in the future.

“His injury is going to heal on his home yard Schafhof, given all the time it needs. This will also give him a gentle transition into his athletic retirement.”

It does appear that Totilas will still be available for breeding, but this is certainly not the end to an illustrious career that we would have liked to see. Unfortunately, the controversy and trouble surrounding the change of rider from Edward Gal to Matthias Rath has been the focal point of the last few years of the horse’s career. From unsoundness issues to rider illness and everything in between, we do hope for a peaceful retirement for a wonderful horse who has given his all to the sport.

Enjoy that retirement, Totilas. You’ve more than earned it.

Not quite ready to say goodbye? Relive one of the horse’s greatest performances, his 92.300% freestyle from the 2009 FEI World Cup dressage championships: