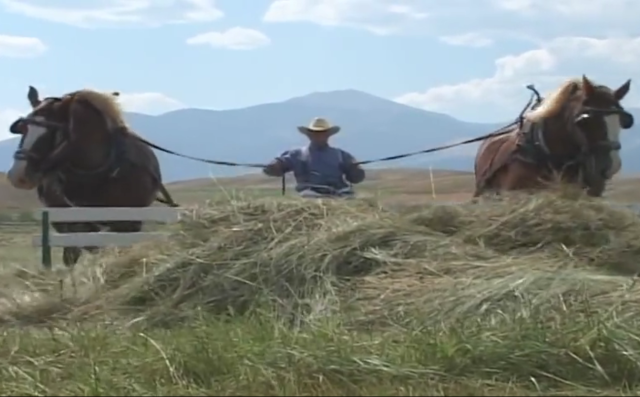 If you thought you were working hard this haying season, check out the old-fashioned way still practiced in Montana!

This unique baling technique is native to Montana, creating massive stacks of unbaled hay that can withstand the elements of a harsh northern winter. When you have hundreds of cattle to feed all winter long, these giant stacks could mean the difference between life or death. Though requiring a large crew to operate, the “beaverslide” is still popular today for big spreads of ranches that don’t have the money to invest in motorized baling equipment.

This video, a preview of a full-length documentary, highlights the steps in using the buck rake and the beaverslide with good old-fashioned horsepower:

While the beaverslide is a pretty ingenious piece of frontier engineering, it’s the buck rake —  and the team operating it — that I find most impressive, from a horse’s perspective. While to the draft horse’s perspective, any load is being “pushed” because of the way he is working up into the collar, this is the only piece of farm equipment I’ve seen where the load is literally in front of the horse being pushed along. The horses are also spaced so wide laterally that it’s almost as though they’re working independently. Very cool!

Loose haying definitely a lot of work for both the humans and the horses involved, but it’s also refreshing to see a place where the old-school way is still the only way.