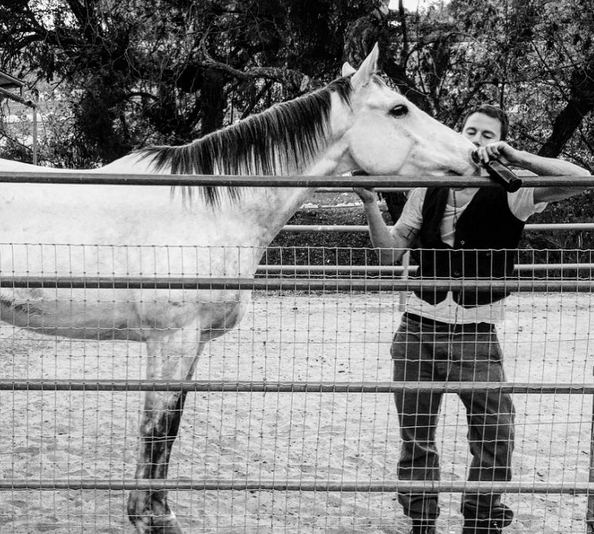 … and the Internet exploded. This isn’t his first rescue animal, either — we’ve got the details on why he’s a man after our own hearts.

Meet “Smoke” my rescue horse. He loves beer! We’re meant to be. (to be clear he just loves the smell)

And as expected, the Internet had a small meltdown. Sure, we’ve featured plenty of celebrity equestrians before, but when they rescue a horse, they earn a special place in the Horse Nation Celebrity Equestrian Hall of Fame! And, of course, when they’re as easy on the eyes as Channing Tatum, it’s really a win-win for all of us.

We’re not sure if Tatum adopted “Smoke” simply as a companion or if he’s destined to be a riding horse as well; Tatum has done a good bit of riding thanks to his starring role in The Eagle which released in 2011. According to an interview with ScreenCrave, the film’s horse master claimed he had never done such dangerous work before with actors on horseback: certain scenes called for the actors to ride their horses on the edges of cliffs.

We dug up a clip of Tatum thundering along on a lovely black steed in a scene from The Eagle:

Regardless of Smoke’s destiny as a either a trail mount or a pet for the Tatum family, he’s joining quite a cast of rescued animals: not only have Channing and his wife Jenna Dewan-Tatum adopted a shelter dog, but Jenna fell for a pig she was originally sponsoring at a farm shelter. She loved Zeus so much that she decided to add him to the family. The celebrity couple have also donated their time to high-profile animal rescue events, such as Fox’s “Cause for Paws.”

Well done, Channing Tatum! We at Horse Nation salute you for your good work in rescuing another animal and warmly welcome you to our Celebrity Equestrian Club.