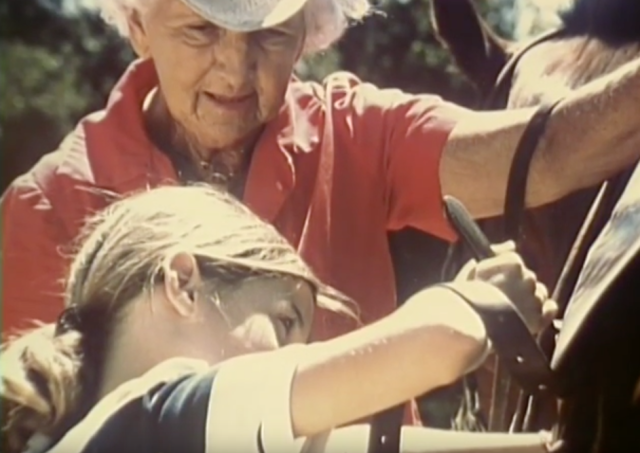 Connie Reeves was the oldest member of the National Cowgirl Museum and Hall of Fame, one of the first women to study law at the University of Texas  and started one of Texas’ first girls’ drill team.

Connie Reeves was born September 25, 1901 in Eagle Pass, Texas. She rode horses before she could walk and received her first horse as a gift from her grandfather when she was 5-years-old.

Not much else is known about her early childhood, but history catches up with her when she became one of the first women to study law at the University of Texas. Unfortunately, the Great Depression halted Connie’s plans. She was forced to head back home and work part-time to support the family’s San Antonio ranch.

She began teaching high school in San Antonio where she founded the ‘Lassos,’ a drill team that remains today. She also began teaching at local riding stables, finally settling in a trainer’s position at Camp Waldemar in 1936 where she was paid $50 for the entire summer. It is estimated that she taught 30,000 children how to ride horses during her 67 -year tenure.

When she wasn’t working at Camp Waldemar, she was managing her 10,000 acre ranch with her husband Jack Reeves. She spent her days herding cattle, shearing sheep, killing rattlesnakes and feeding hungry ranch hands.

Connie was inducted into the National Cowgirl Museum and Hall of Fame in 1997 and in 1998 won the Chester A. Reynolds Award from the National Cowboy and Western Heritage Museum in Oklahoma City, one of two women to do so. Her autobiography, I Married a Cowboy: Half Century with Girls & Horses at Camp Waldemar, was published in 1995. Her motto was, “Always saddle your own horse.”

”I still ride alone,” Mrs. Reeves had said in an interview with National Public Radio. ”Sometimes I’ll just get on the horse and go down to the river. We’ll just ride up and watch a little baby fawn nursing or watch the birds in a nest.