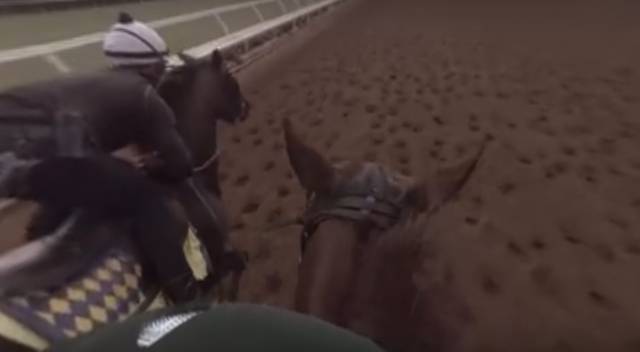 If you thought last week’s 360-degree view of American Pharoah’s workout was cool, you’ll love this tandem workout with the same effect!

Last week, we shared the GoPro spherical video of American Pharoah’s last Del Mar workout before the Haskell Invitational. The never-before-seen technology allowed viewers to actually change the point of view mid-ride, about as close to the action of truly seeing what a workout looks like as most of us will ever get.

The good people of the TVG Network are back with another such 360-degree-view video: this time with a tandem workout, where two horses are worked together. Step right into the exercise rider’s shoes and turn your view to see the other horse eat your dust!

(If you’re slightly nauseated by the “fishbowl” effect and you happen to be watching this video on a smartphone, try watching it again on a laptop or desktop computer — or watch the video through the YouTube app. It will look more like a “normal” video, and you will then be able to enjoy the view-shift options!)

Pretty cool stuff! We’re excited to see where this technology goes next — I’m hoping that a foxhunter will give it a shot to let us all vicariously see what a hunt looks in 360 degrees.