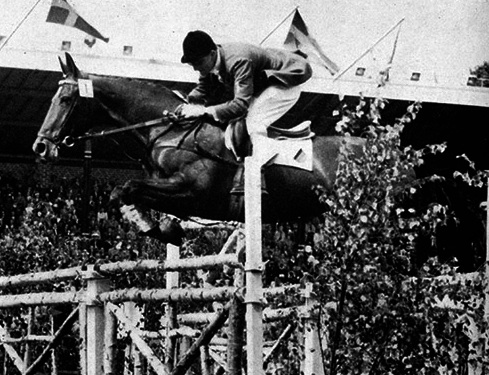 Halla, a Standardbred mare ridden by Hans Günter Winkler, is the only horse ever to win three Olympic Gold medals in the sport of show jumping.

Halla (also listed as “Sonnenglanz”) was born in the yard of Gustav Vierling in Darmstadt out of Helene, a French trotter horse of unknown breeding, and the Standardbred Oberst. Initially trained for steeplechase, Halla was discovered by the German Olympic Committee for Eventing. The mare proved fickle, though, and never found her stride in the event.

In 1951, an up and coming show jumping star, Winkler, took on the difficult ride and the rest is history. They won back-to-back World Championships in show jumping when she and Winkler competed at the 1956 Olympics in Stockholm. After a rough landing in the first round, Winkler tore a groin muscle. Despite Winkler suffering through tremendous amounts of pain, the pair won both individual and team Gold.

Four years later, at the 1960 Olympics in Rome, Halla and Winkler led the German team to another victory.

Halla stands as the horse with the most gold medals from the Olympic Games in The Guinness Book of the Records, which is merely the icing on the cake of her 125 recorded jumping competition wins.