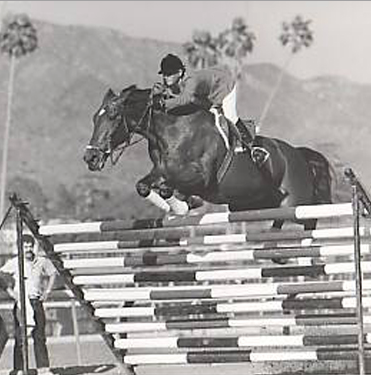 Check out this story of an unruly Standardbred mare and the woman who loved her.

Bionic Woman was a registered 1974 bay mare out of Addio Byrd and Bonbon Lobell, but as a failed trotter she was traded for a farrier bill. Eventually, she would end up in the hands of grand prix rider Susie Hutchison and her mentor Jimmy Williams in the mid-1970’s.  She arrived without a canter and a bad disposition, but the team would rise to the top of their sport, helping the U.S. team to a third-place finish at the Spruce Meadows Nations Cup in 1978 and second place in 1979.

Check out this video of Bionic Woman’s unique style, attributed to the fact that she never really learned to canter. Her signature “bunny hop” was the only way to bring her down from a strong gallop.

Bionic Woman retired to have six foals. She lived out the remainder of her life on a field at Hutchison’s farm.

What’s your favorite show jumper, past or present? Shout out in the comments!