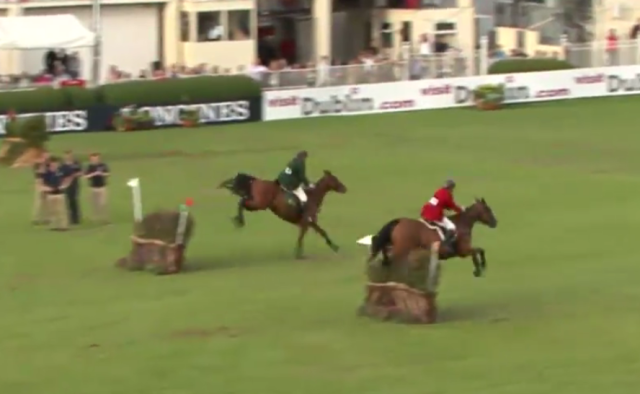 The Dublin Horse Show hosted one of the most insane arena sports we’ve ever seen: hunt team head-to-head racing.

Ireland is famous for its totally fearless, throw-your-heart-over-first fox hunters (case in point: this helmet cam and this hilarious video.) So why not feature and celebrate that most important part of Irish horse culture at the prestigious international Dublin Horse Show? The much-loved Hunt Chase Cup returned for another year of thrilling (and admittedly occasionally terrifying) competition.

The concept is pretty simple: hunt teams compete head-to-head on parallel courses of cross-country style fences built right in the arena. Teams consist of four riders and compete in relay, passing a hunting horn from rider to rider: in riding order, one hunt member whose minimum age is 35, one hunt official, one lady rider (sidesadde is encouraged but not required,) and one “heavyweight male” over 12.5 stone including gear (that’s 175 pounds.)

The course includes banks, hedges, water, logs and a few lighter hurdles. Teams qualify for Dublin’s cup by competing in a minimum of nine qualifiers, held all around Ireland throughout the year. Oh, and this isn’t an arena alternative to the hunt field for those not quite ready to tackle a full chase: one of the rules states that “horses must be bona fide hunters owned by members or subscribers within the Hunt Country.”The

Watch the final round, which was won by the Killinick Harriers over Waterford. (Note: must be logged in to Facebook to view.)