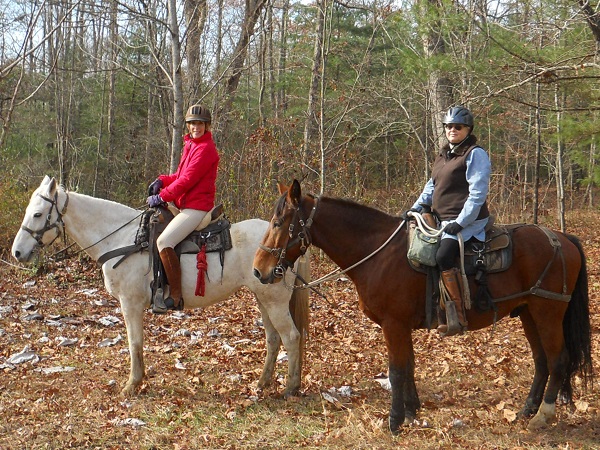 Candace Wade, a late equestrian bloomer and co-author of “Horse Sluts: The Saga of Two Women on the Trail of Their Yeehaw,” recounts in colorful detail (and occasionally colorful language) a particularly challenging trail trek.

“Penny and I are Thelma and Louise without the cliff.”  That’s the opening line in the introduction of a book I wrote with my riding buddy, Penny. The book is titled Horse Sluts: The Saga of Two Women on the Trail of Their Yeehaw. Penny and I plunged into riding in our 40s. I found that by riding trails with chuck holes (code for making mistakes, releasing control and scaring myself — which at 61 with two hip replacements doesn’t take much) I have ramped up my self-confidence and widened my group of enthusiastic friends.

Penny and I don’t own horses, we rent — borrow — barter — whatever, to get a horse between our half-chaps. I’ve been glad to muck out a few stalls to get on the good side (on top) of a horse. Penny and I take lessons — a lot of lessons. Lessons keep us safe. Lessons bolster our confidence. If the weather is crummy or we can’t get out on a trail, an hour lesson keeps us tuned up for the next adventure.

When Yellow Face (trail at Big South Fork in Jamestown, TN) rose before us, my saddle time had been jaunty trots up and down the rolling hills south of Nashville and arena lessons. Penny and I surrendered ourselves to the care, custody and judgment of an ingenuous country boy named Ricky.

We were zazzy happy. We danced on the brink of our first trail riding adventure. Talk about yeehaw. Unlike with sex, there’s no greater thrill than your first time.

Ricky meandered his horse through the woods. Penny and I followed like little ducks as he turned up a side trail that looked more like a game path. The horses seemed to know what to do as we worked up an incline. Then… then trail got steeper. The horses worked harder, sometimes speeding up to gather momentum. We turned a corner and then… it got way steeper. Holy s***! We seemed to be scaling a 180-degree angle up the mountain, between boulders ankle deep in mud. The horses struggled for purchase.

“Give ‘em their head,” Ricky called back to us. No s***! The horses lugged us up the rocky incline. Finally, we clambered up the last few feet to the crest then stopped to let the horses calm their heaving sides. Heaving was a good word. Penny and I agreed later the climb elicited that very response from us — the throwing up kind, not the breathing kind.

For some loony, ignorant, beginner’s luck reason, I loved it. I was high on the pungent fragrance of achievement and reclaimed youth. I didn’t have enough sense to be scared. I figured Ricky and the horses knew what they were doing. After all, the trail had a name. People rode it. I prickled with pride that I had conquered it.

The reward for anyone who made it up the hill was warming sunshine on the porch of a one-room cabin used by the occasional campers, inebriates and random lovers. It looked like sanctuary to us. We tied the horses and sprawled on the porch to eat our lunch. Between chews, Penny asked (with a lilt in her voice) if there was another way down.

I supposed Ricky wouldn’t have brought us up there if going down was dangerous. It’s important to remember the military likes ‘em young because young men don’t know any better than to rush headlong into peril. Mature women are supposed to have more sense.

Lunch over, we mounted. Ricky led us to the brink of the crag we had just scaled. I followed Ricky, Penny followed me. Ricky called back some nifty little instructions like, “Lean back.” No problem! Everything in me wanted to lean away from downhill. “Let ‘em find their own way down.” Great, ’cause I certainly had no clue of the best way. “Be ready to pull ‘em up if he starts to go down.” Oh, thanks. Penny couldn’t hear Ricky so I called the instructions back to her. I knew she heard me when “F***” echoed through the valley.

We preceded to horse-rappel down Yellow Face. I swear the horses were hopping from boulder to boulder down the mountain. There were times when no hoof was touching earth. I got a little panting-bugged-eyed when we had to pick our way down gooshy, muddy crevices through the boulders. It would have been so easy to get a hoof caught and tumble the rest of the way down, horse and rider bouncing from boulder to boulder. Brrrrr. I get nauseating chills thinking about what could have happened. But, it didn’t.

I was two-feet-off-the-ground thrilled when we turned back onto the trail back to the barn. I felt raw and alive. Turn the page to a picture of a horsewoman — that was now me. The Yellow Face ride may be my proudest horse moment. I did it. I did it. Penny and I agreed we never wanted to ride it again, but still, we did it. We had t-shirts made with a cartoon of a horse in a riding helmet rappelling down a cliff. The caption read, “I Survived Yellow Face.” Six months later, the Yellow Face trail was closed because it was too dangerous. Ha! Penny and I rode it our first trail ride at Big South Fork. Others can only dream of the legend.

P.S. Our trail rider purveyor, Larry McMillan of Southeast Pack Trips, recounted how another rider (self-proclaimed expert) erupted into tears at the prospect of riding down Yellow Face. She offered him cold hard cash to get her down another way.

Horse Sluts is available on Amazon, Taborton Equine Books, Northshire Bookstore and True West Campground and Mercantile. Other ways to keep up with the Horse Sluts: Listen in for an interview on The Writer’s Block Radio Show on Aug. 27 at 10:30 p.m. CST.; meet Candace at the Equus Film Festival NYC in November, where she will be sitting in on a literature panel; or get your book signed at the authors’ booth at The Festival of the Horse and Drum in St. Charles, IL on August 15. Last but not least, keep it tuned to Horse Nation for an upcoming book review!

Candace Wade writes political diatribe, wrote “Hillary’s View” pet column and four unpublished film scripts. She learned to ride at age 46. Candace is audacious about tackling stuff she doesn’t know how to do. Born in Los Angeles, she lives in Franklin, Tennessee with her husband Bill and dog Luccia.