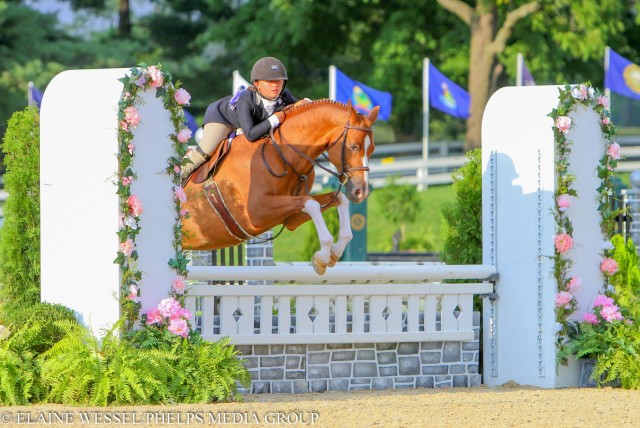 These ain’t your backyard-variety ponies: ooh and aah over these champion ponies and their top-talent junior riders from last week’s US Pony Finals in Lexington, Kentucky!

The precursor to the US Pony Finals actually began as an invitational competition, a challenge issued by the British Show Pony Society to pit the best British ponies and riders against the best of America. The first competition was held in 1959 at the National Horse Show in New York City, with the British pony contingent taking the day. Resolving not to be bested again, the American pony riders held a two-week “boot camp” at Gladstone, New Jersey’s Olympic Training Center, and won the next competition held two years later.

Inspired, the Pony Finals were created in 1967, hosting the best ponies in the country by qualification in hunters, jumpers and equitation. With numerous championships, including a Medal Final, the annual competition draws the absolute best, and 2015 was no different.

Don’t be fooled by the garters and show bows: these are the best young riders in the country, using the Pony Finals as the stepping-stone for which it was intended to eventually transition to professional or top amateur show careers. They have plenty to say about the ponies they’re riding as well, from the angels to the tiny demons! Here are some of the highlights from the US Pony Finals, held August 3-9, 2015 at the Kentucky Horse Park in Lexington, Kentucky.

I’m very excited about this win. My favorite part of today was our jumping trip, and it was probably one of my best rounds with this pony. He has two sides; he is either really nice or really grumpy, but he’s been really good lately. He doesn’t really like other ponies, but he likes me when I give him treats. I think he likes being at the horse show much more than he likes being at home.

He is never wild; he is always very sweet. He’s just perfect, always. He never puts a foot out of line. I’m very excited and very lucky to get to ride him. I want to thank Ava Peck for letting me ride this pony. He’s so perfect. This is definitely my favorite part of the week so far. I’m excited to hang up my ribbons and put up my trophies in my room when I go home. This was for sure worth the trip. The competition is one of my favorite things here; it’s much more competitive than at home. I think that the better competition makes me ride better.

It is always such an amazing opportunity to get to ride the ponies I do. It is just so much fun. I love how family-friendly Pony Finals is – they make it really fun for everyone.

This is my fourth year at Pony Finals, and this is my first champion ribbon. It feels amazing. It really does. We have really grown with our bond. During the winter we had some problems getting to know each other, but then we definitely got over them in the summer. His personality is amazing, he loves to be around people and loves to have attention. He’s just like a teddy bear.

Pony Jumper Champion: Elizabeth McDougald and Knock My Sox Off

This is my best result, and it is definitely a dream come true. I have always competed on him and we have never done that well. I am 18, showing in my 17-year-old year, so this is our last time competing in the U.S. Pony Finals. He is extremely sassy and nosy. He is Mr. Personality. I learned to growl at him while training him. He listens to me, and it works. This is my last year showing him here, but he is so special, and he has a forever home with me.

I’m so excited. I came in here thinking that it would be great if I was in the top 10 because last year I was in the top 25. My goal was to just be top 10, but I never expected to win. I’m so excited, I’m so pumped. My heart was in my stomach. I was shaking. Just making the top 10, I achieved my goal. The courses were challenging, especially the long four-stride line and several of the rollbacks. The second course had a lot of rollbacks, and you had to be very careful to land on the correct lead or to get the change quickly. Luckily, Rico is very good at getting his lead changes, which made it a bit easier.

Need more ponies? Keep an eye out later this week for an HN exclusive interview with Madison Gentry, who piloted her mustang pony through his fourth career show — at the Pony Finals!