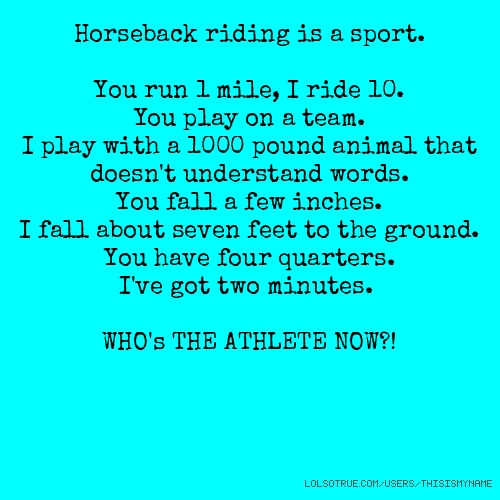 As equestrians, it is easy to get riled up when an arrogant or uninformed person poses the age-old and incessantly frustrating question: “Is horseback riding really a sport?” Most of us, myself included, would be inclined to go on a tirade about how of course it’s a sport (have you seen my thigh muscles?) or even quote the omniscient Internet meme — like this one:

With regards to this particular quote — while it’s undoubtedly flattering, I would argue that, for an average rider like myself, it is an exaggeration of hyperbolic proportions (except for the last one, of course!) Yes, we have abs, yes, we are strong, and yes, we possess some level of intelligence, but it is unrealistic and even rude to presume that we are superior to experts in other sports. Likewise, riding is only as intense an exercise as you make it — I would not consider a leisurely trail ride exercise, but I’m exhausted after a no-stirrups practice.

For the average person who has only experienced horses through a pony ride or commercial trail ride, it is understandable that they would not consider riding a sport. Without experiencing or knowing about the various disciplines of riding, it’s easy for someone on the outside to lump them all together without realizing their point of view is offensive to some dedicated equestrians.

“In our sport, we don’t have breaks or timeouts, there’s no off season and no one sits out on the bench. We don’t postpone because of weather and we don’t quit on account of injury. We communicate without words. Our sport is about finding distances, swapping leads, counting strides, spinning, doing the required pattern how it is written, and looking good doing it. If you think that running, jumping, shooting, throwing a ball, or anything else is more difficult than being on an animal that weighs 10 times as much as you, with a mind of its own… while riding full speed towards a solid stationary object that can stand taller than you do is harder? Prove it to me. I dare you to get on a horse and do what we do. We’re dedicated and gutsy. We fall, and get right back up there and do it until its right.”

The (sadly tiny) picture above is likewise exaggerated in that it sounds like a defensive response to a non-horse person’s questioning whether equestrianism is a sport. Riding is difficult for its own reasons, just as every other sport is hard to master. The fact that riders rely solely on nonverbal communication and body language is often preached as a means of proving that riding is somehow superior in difficulty to other sports, but most people fail to acknowledge that there are uncontrollable variables in every sport — I’ve noticed that, most of the time, my horse is far more responsive to my input than, say, the opposing team during a softball game.

I am proud to be an equestrian. I love what I do and am relatively talented at it, but I don’t feel the need to call other athletes’ sports into question to increase confidence in my own skill set. In fact, I have accrued more significant injuries from playing softball than I have riding. I generally lose muscle tone after softball season is over. I struggle to run one mile, but riding ten is a daily occurrence. Horseback riding is a sport that requires a great deal of dedication and athleticism, but it’s ridiculous to presume that we are better athletes than anyone else.