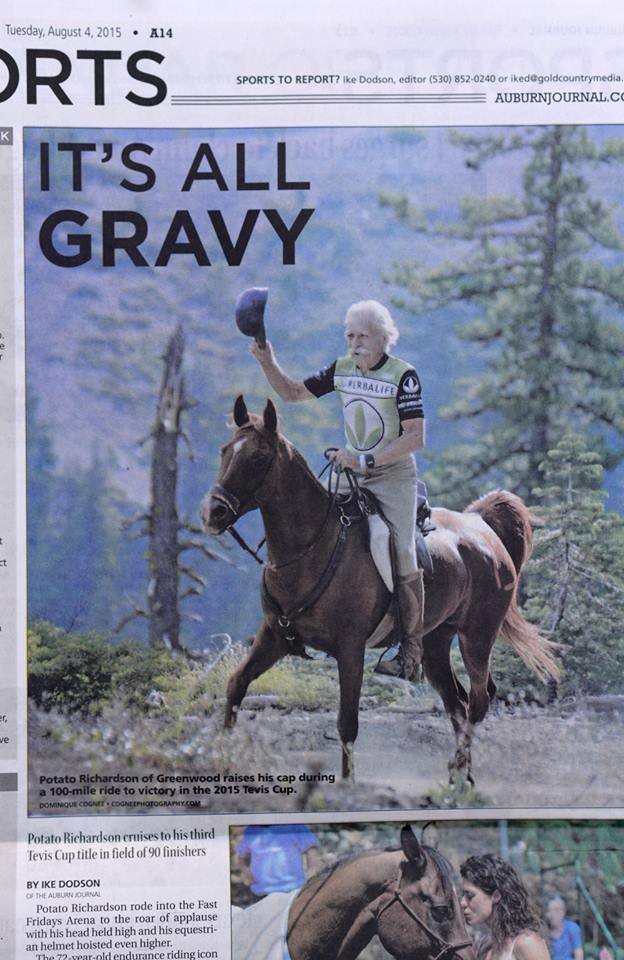 His third win, no less!

The Tevis Cup celebrated its 60th anniversary this year, challenging endurance riders to a grueling 100 mile, one-day race across some of the toughest terrain there is. A total of 201 entries were received for this year’s race, representing 12 countries and 20 U.S. states.

At the end of the day, 90 of the starting riders finished the race — a true testament to the difficulty of the sport. Watching the final jogs and the horses crossing the line reveals many fresh looking horses who look as if they could easily go around again! You can catch up on the finish line action on the Tevis Cup Facebook page here.

72-year-old Potato Richardson and his 14-year old Arabian mare SMR Filouette won the race in a time of 16 hours and 50 minutes. This is not Potato’s first win — he also won in 2002 and 1998, also aboard homebred Arabians, including Filouette’s grandmother, Fille de Caiman. He finished 30 minutes ahead of the second placed pair, Gwen Hall and Sizedoesntmatter.

Potato Richardson and SMR Filouette finishing at the Stadium, the 2015 Tevis Cup Winners

“It took dedication, staying focused on goals,” Potato told the Auburn Journal. “I knew I had it about three miles back.”

Congratulations to all riders who made the trek through the wilderness in this year’s Tevis Cup! We can’t express our admiration enough — and a big round of applause for Potato Richardson, who is still living the dream and proving that age is just a number.