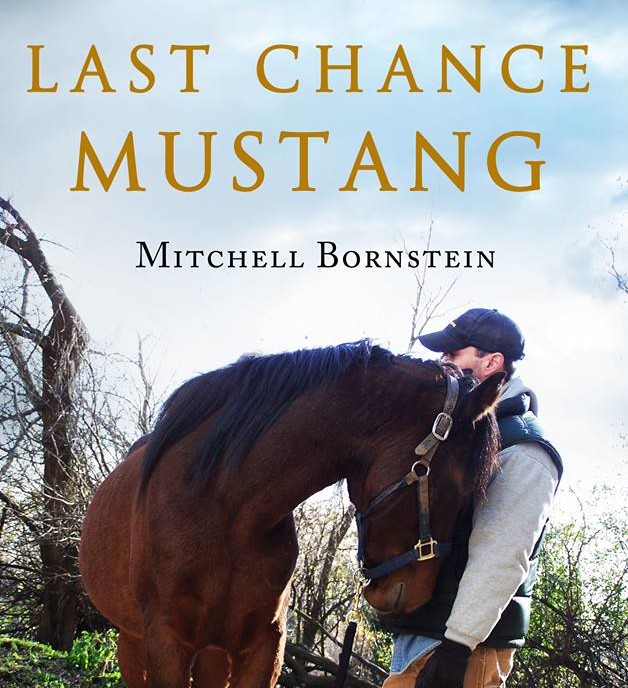 Lorraine Jackson reviews this tale of transformation about an abused mustang.

Last Chance Mustang is Mitch Bornstein’s heartfelt autobiographical account of his attempt to rehabilitate Samson, an abused BLM mustang, and the transformation experienced by Samson, his desperate owner, and Bornstein himself.

The author shares his frightening introduction to Samson in a dairy milking stall in rural Illinois, where the horse is absolutely untouchable and violently fearful. The recently gelded 12-year-old mustang had been put there to keep him from hurting people as well as other horses, since according to Bornstein and his owner, Amy, Samson had kicked, bitten, body checked and trampled numerous individuals who had attempted to work with him in the past. Many of these trainers and owners had pursued the most severe and damaging of methods to break down the horse, but those methods had only served to make the horse more unruly and violent over the years. Now Bornstein had to address Amy’s ultimatum: make Samson a solid citizen, or prepare to see him sent further down the river.

The book attempts to play the role of many books at once; part training methodology, part history of horses in general as well as the BLM, and part introspective account of Bornstein’s commitment to save Samson from a sad ending. The author describes how he was able to transition Samson from the isolated confinement of a dark stall to a life that involved grooming, leading, turnout, and even a field companion. The author’s discussion of his training methods are neither groundbreaking nor written in such a way that readers are likely to apply it to their own horses, but his training anecdotes for a deeply broken horse are fascinating, heartfelt, and at times amusing: relatable emotions for many a horseman.

The role the book attempts to play as a history lesson on wild horses and the BLM is less successful; Bornstein attempts to analogize Samson’s deeply disturbing history to the BLM round-ups going on in Nevada at the same time, but the analogy requires huge sweeping generalizations and hyperbolized emotions, which ultimately undercuts his argument and twists the history of the Wild Horse and Burro Program beyond recognition (for example, his implication that “untold numbers of adopted horses died from abuse and inhumane treatment during their initial year of domesticity” is a misleading and vaguely cited claim).

By far the most successful element of the book is Bornstein’s intimate and vulnerable account of how he and Samson were able to bond and forge ahead despite the odds against them. Both found light, growth, stability and dignity in their partnership, and that is truly inspiring.

Bornstein deeply desires to make Samson the living symbol of all wild horses, and the heart of that message is admirable. But ultimately, Samson is not that symbol. He is the extreme exception to the rule of wild horses who are gathered and gentled. Statistically, most will end up in long term pastures in the Midwest, many will thrive in adopted domesticity, and many will prove to be interesting challenges all their life, just like many domestic horses. But making Samson the symbolic representative of the wild horse undercuts the horses Bornstein so admires, and ostracizes the people his book might otherwise convince to adopt and gentle a wild horse themselves.

As an emotional argument against the Wild Horse and Burro program, Last Chance Mustang is a bit of a hot mess, but as a story about one man and one horse who desperately needed the devotion and respect of a true partner, Bornstein does Samson a great service both in his training and his telling of Samson’s story.