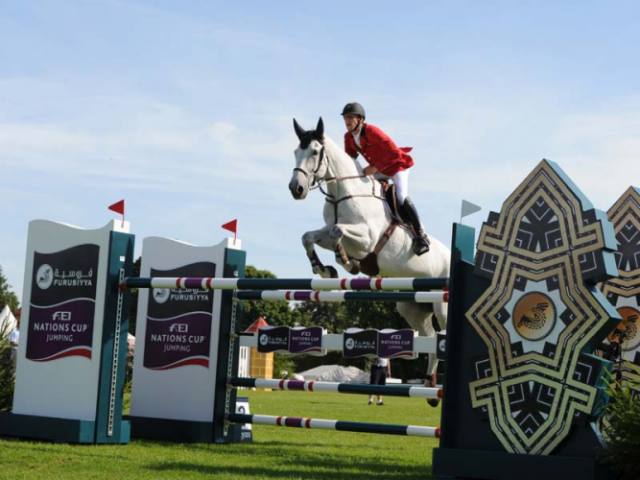 You know how sometimes you already kind of know who’s going to win? This was not one of those situations. This three-way tiebreaker is one of the most exciting we’ve seen!

I don’t recall ever watching a jump-off round in which I actually gasped out loud so many times. Don’t get me wrong — I find show jumping plenty exciting on its own. But this tiebreaking round between the US, Switzerland and Belgium from the Furusiyya FEI Nations Cup leg held at Hickstead, England is in a category all its own. Watch the video, then scroll down for our recap:

WHAT the WHAT. Okay, first of all, we’d like to give a shout-out to course designer Kelvin Bywater for an extraordinary course. Second, to our homegirl Beezie Madden and Cortes ‘C’ of the adorably-crossed forelegs, keep your chins up — you’re still first in our hears, we all have a bad day, and we’ll refer you to our “Oh Crap” series if you’re still feeling down.

Following Cortes’ surprising refusal and subsequent eight penalties, Switzerland’s Janika Sprunger and Bonne Chance CW laid down an impressive ride, cutting the corners in every possible location but wisely straightening out before the double that claimed Beezie Madden. With such a textbook ride already on the books, it seemed unlikely that Belgium’s Pieter Devos and Dylano were going to edge out a win — especially after the pair turned in a dismal twelve-fault second round prior to the tiebreaker.

However, Belgian Chef d’Equipe Dirk Demeersman clearly knew something that we didn’t in selecting Devos and Dylano. Despite numerous airs-above-the-ground (including that kickout over the penultimate fence and plenty of cavorting about on the final approach) Devos stopped the clock 42.60, much to everyone’s surprise — including his own. My favorite part of the video is undoubtedly when Devos points at himself, asking his team on the sidelines if he had, in fact, won.

But that’s what we love about equestrian sports — you never know what will happen next!