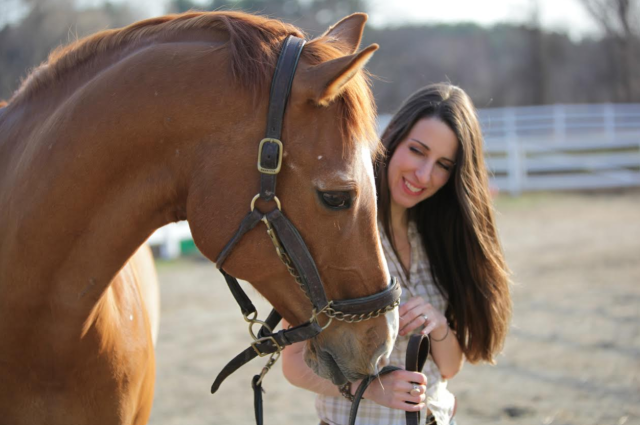 Sometimes horses come into our lives for a reason, and such was the case with Rita and her horse, Claret. In her debut memoir she shares the journey of how her Claret helped her heal from a crippling panic disorder.

When Rita started having panic attacks after moving with her husband to a bucolic Massachusetts town, she wondered: why now? After an abusive childhood and life as a teenage runaway, she had finally found stability and the love of a faithful and kind man. But the trauma of Rita’s past refused to lie dormant. And at a time when it seemed her life couldn’t have been be more peaceful, she was besieged by sudden terror: a racing pulse, shortness of breath, tunnel vision, and fear that her heart would explode. As her panic attacks increased in severity and frequency, Rita tried everything from cognitive behavioral therapy to cooking and pottery classes to an Oprah-approved healer to various psychiatrists and therapists. But it was not until she met a horse named Claret—a mischievous but huge-hearted horse with anxiety problems of his own—that she could finally heal.

Rita’s memoir, Let the Tornado Come, was published in hardcover by Simon & Schuster in June 2014 and will be available in paperback for the first time on August 25, 2015. She kindly took a few moments to speak with Horse Nation about the inspiration behind her book.

First things first (since we’re all horse lovers here!) tell us about your horse, Claret.

Claret is a 16.2h chestnut Holsteiner with a white blaze. He’s a bit of a jokester, and he’s not shy about frisking people for treats (he has a penchant for jellybeans). He’s been a jumper, a dressage horse, and a saving grace.

Have you always felt a connection with horses, or was your experience with Claret your first?

I’ve always felt drawn to horses and moved by their power, grace, and beauty, but a childhood spent in a tumultuous home, followed by years as a runaway, didn’t allow for equine adventures. It wasn’t until I was in my thirties that I got to ride my first horse, and it wasn’t until I met Claret that I fell completely in love. My connection with him is one of the greatest gifts of my life.

What was it about Claret that helped you work through your panic attacks?

Claret struggled with panic attacks of his own. He spooked at everything, and he eventually became so anxious that I was advised by a trainer to give him away because he was dangerous and unfit to ride. But I believed in him. And I believed he needed someone to believe in him, someone he could learn to trust. So I helped him move toward his fears by taking small steps and giving him lots of encouragement, and that taught me how to be more courageous about moving toward my own fears. Believing in him showed me how I could also believe in myself.

Do you have any advice for others who may be struggling with anxiety issues similar to yours?

I have lots of thoughts about panic and anxiety, but here are three things I think are really important:

First, have compassion for yourself. At least forty million Americans struggle with an anxiety disorder, so you’re not alone. The worst mistake I think people make is to be hard on themselves and to feel ashamed of their anxiety, when the opposite is needed: patience and kindness. There is no place for shame here. And I say that as someone who was once afraid to leave the house, to walk up a flight of stairs, and to shower alone.

Second, trust yourself. There are a lot of treatments for anxiety disorders, both conventional and esoteric, and it can be disheartening when something doesn’t work. But that’s more the norm than the exception. So don’t be afraid to try things and to listen to your instincts. Sometimes people will tell you that their way is the only way, but that’s not true, and our wisdom about ourselves should never be discounted. Some of the things I tried before I finally started to feel better were cognitive behavioral therapy (despite its 95% success rate, this actually made my anxiety worse), psychotherapy, energy balancing, acupuncture, smile therapy, visualization, affirmations, and various self-help books. Who knew that a mischievous horse would be such a huge part of my healing! Other things that helped were EMDR, writing in a notebook every day, and setting small, attainable goals for myself, such as this one: You will leave the house for five minutes today.

Third, be curious. Ask yourself what your panic/anxiety has to teach you. You might be surprised by the answers. Once I started asking that question, instead of other questions like what the hell is wrong with me and how can I be cured RIGHT THIS MINUTE, the answers started to come. I learned a lot about the origins of my panic attacks, as well as about love and strength and how to be happy. I learned how to comfort myself. And I learned to trust myself.

When, and why, did you decide to record the narrative of your journey in a book?

Sometimes when I was having a panic attack, I would run outside and sit on my front step. For some reason, that seemed like the safest place to be. And on one such day, after reading about the forty million other Americans like me, I wondered where they all were, because certainly people weren’t going around talking about it. I heard the cars driving by on the road, and I wondered how many times I’d driven by someone who was sitting on another step somewhere, panicking like I was. I wondered what I would have done if I’d known, and instantly I knew the answer: I would have stopped my car, walked over to the fellow panicky soul, and reached out my hand. So that’s what this book is—my hand reaching out to others.

Do you feel like your anxiety issues are now resolved or are they something that you have to continually manage?

I’m grateful and happy to say that my anxiety issues are largely resolved. I still struggle with driving on the highway, but I look at it like this: panic and anxiety taught me a lot, and in many ways, I am better for it. Moving through my fears was like going through a dark portal to a place filled with light, and it ultimately brought me closer to myself, and to my horse, Claret. So if the price I pay is residual anxiety on the highway, I’ll take it. Besides, I prefer country roads!

What’s in the future for you and Claret?

A lot of snacks, if you ask him. A lot of hugs, if you ask me. Outside of that, we’ll stay fit by doing dressage. We’ll meander around on the trails. And I’ll kiss his snout exuberantly and often.

A short video about Rita and Claret:

LET THE TORNADO COME from Rita Zoey Chin on Vimeo.

You can read more about the book here and keep it tuned to Horse Nation for an upcoming review!