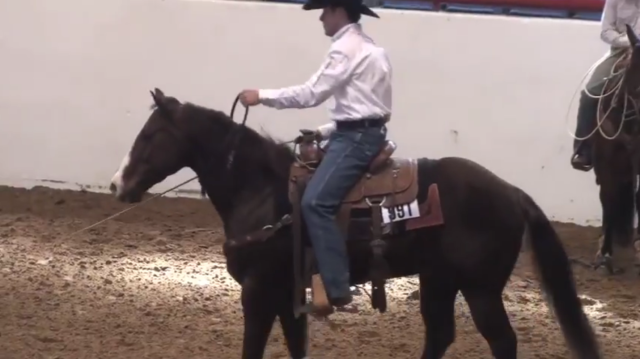 What happens when you dare the world’s greatest cowboy to take the bridle off of his best horse?

Trevor Brazile, often hailed as the world’s greatest cowboy, has more world championship buckles to his name than any other professional rodeo competitor: he’s racked them up in team roping, tie-down roping, steer roping and the all-around title. There’s little doubt that he is simply the best at what he does — but he didn’t get to the top by mere chance. Brazile works hard to be the best, and his string of exquisitely trained and conditioned equine partners helps more than a little bit.

Brazile’s not afraid to lay it on the line to prove that he and his horses are true partners: in this video, from the 2010 Fort Worth Stock Show AQHA world qualifier, Trevor Brazile performs his typical flawless roping run … but his horse Texaco is doing his job without a bridle. Sure, by now we’re used to seeing that kind of thing in reining and a few other disciplines — but a timed event?

According to an article from the AQHA, Brazile was dared to leave the bridle in the tack room by fellow world champion roper Cade Swor, who joked that the competition wouldn’t be fair if Brazile rode Texaco unless he went without a bridle — something that Brazile had never attempted before. Brazile’s reported response? “Get a good seat.”

Boom. Mic drop. Brazile’s 7.8-second run would have won the round … except for a little AQHA loophole that no one thought about, which disqualified Brazile and Texaco because they were missing a required piece of tack. But Brazile didn’t mind — he figured Texaco would go down in history for his performance, and he was right.