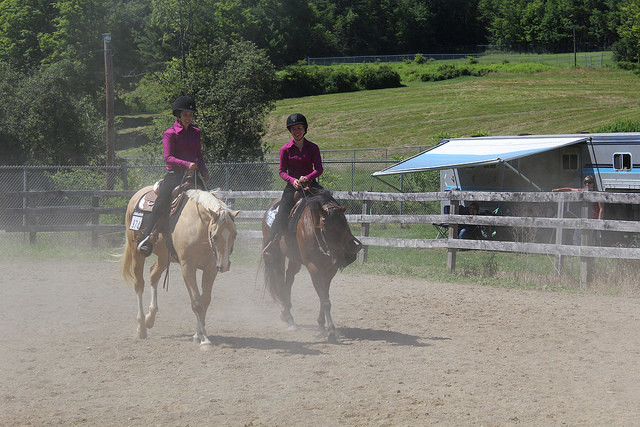 Haley Ruffner recounts her recent experience of taking a green horse out of his comfort zone.

Cricket and Jimmy showing off their Pleasure Pairs skills with me and my best friend Elena aboard, showing off our matching outfits. Photo courtesy of Keystone Equine Entertainment and Training.

Horse showing is like a box of chocolates: you never know what you’re going to get. (That’s how that quote goes, right?)

A couple of weeks ago, I took my relatively unseasoned horse to a small open show, mostly because he’s coming to college with me to be used in an IHSA program and I wanted to test the waters, so to speak, and see how much work needed to be done before he was show-ready. It was his first show in almost three years, and I really wasn’t sure what to expect–would he remember to wear his big boy pants that day and behave like he does at home, or would the new and terrifying sights of a new arena and busy fairgrounds make him lose all semblance of focus?

We arrived and unloaded with little fanfare (always a positive) and he was his usual inquisitive self–the barrel in the corner was mildly scary only until I had let him sniff and slobber all over it, and he tried to stop and say hi to every person standing alongside the rail. Warm ups went well, despite my original misgivings that the morning hunt seat portion of the show would be a disaster because a) I hadn’t ridden hunt seat since the last IEA show in February, and b) Cricket hadn’t had an English saddle on him since then either. He acted for all the world like he’d been schooled in a bouncy trot and soft canter for months on end…at least until about the second class in, during which he decided he really just wanted to canter around and run through the bit.

We made it through the rest of the morning relatively unscathed except for rising blisters on my ring fingers from his very rude and uncharacteristic bit wrestling (and without running anyone over) and finally we moved on to the Western part of the show. I told him that he was a bad creature and he gave me the sad eyes and looked appropriately chastised, and then I changed from breeches and hunt coat to chaps and a western shirt and off we went again.

During the second half of the show, we evidently chose a good chocolate out of the metaphorical horse show box, because Cricket was as much of a gentleman as ever and tried his best for me.

What I took away from that day is that you have to react to what happens as it comes, and that sometimes you just have to make yourself enjoy the ride even if it’s rough going at first. Except for some morning bumps in the road, it was a positive experience for my inexperienced horse, and I feel more confident in his ability to behave himself and relax into the rhythm of showing.

Steve Shank, my IHSA coach and Director of the equestrian program at Alfred, riding Cricket in the Adult Walk-Trot class. Photo courtesy of Keystone Equine Entertainment and Training.