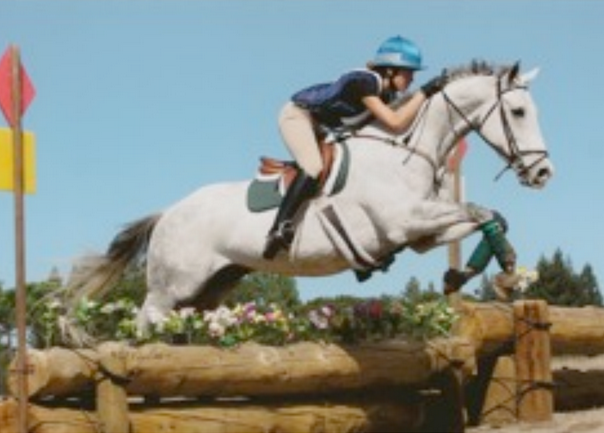 Through life’s various changes, Sigourney and Poppy handled every challenge that came their way.

Poppy was a four year old race track reject, and I was a seventeen year old high school junior when we met in the fall of 2007. Not only did he help me through the trials and tribulations of high school, college and being a young professional rider, he has shared his compassionate nicker, inner calm and zest for life with so many. Poppy is special because he is the epitome of the loving, trusting and selfless equine that can make any bad day a bit better.

From the beginning, Poppy was an old soul. He was calm and thoughtful beyond his years, and the enjoyment I get from working with young thoroughbreds definitely comes from this first experience with him. By the time he was five, we were leading trail rides in the local redwoods, conditioning for endurance rides and practicing our polo skills. Anything you wanted him to do, he was game. If you were having a bad day and did not want to do anything, he was okay with that too. On such a day, he would turn his huge brown eyes on you, put his head in your chest and sigh as if to say he understood.

In college, as I became interested in competition once again, and decided to event, it was Poppy who packed me around my first beginner novice. We had cross-country schooled once, he had never seen a dressage court before, and our arena at home was hardly bigger than a round pen. We finished in seventh place, and I think it was his huge heart and desire to please that allowed us to finish.

As I started my teaching career, Poppy touched the lives of my students as well. My young students were in awe of the huge, noble grey horse that was so gentle and kind. In one of the first riding camps I taught, I had my tiny, timid beginner student was bucked off by a very naughty pony in the first ten minutes. At a loss, I threw a bridle and saddle on Poppy, and he very happily packed around a tiny girl in a tutu (her preferred riding apparel) for a week. The studentʼs favorite part of the lesson was the end, where she would smother Poppy in hugs (I daresay this was his favorite part as well.)

My working student learned to jump on Poppy. He gave her confidence because she knew he would always get her to the other side of the jump. She learned to respect a horseʼs quirks, as Poppy has many.

Poppy has an indomitable spirit. He has recovered from old injuries sustained at the track and from several freak injuries over the years. His newest talent is as a trick and in-hand dressage horse. Poppy gives all of his effort, every day, and is always there to train his kind big brown eyes on you and give a sympathetic nuzzle when you need one.