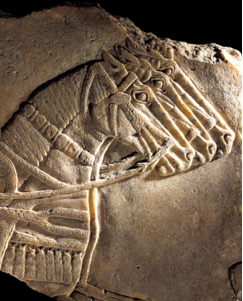 Or at least the first one who wrote things down.

Around approximately 1345 BCE, Kikkuli, a Hittite horse master, developed the first recorded plan for interval training and caring for horses. With Kikkuli’s horses, Hittite charioteers forged an empire covering what is now Turkey, Syria, Lebanon and northern Iraq and rivaled that of the better known Egyptians. The equestrian training manual was preserved on four clay, cuneiform tablets known as The Kikkuli Text excavated by Hugo Winckler in Boghaz-Koy, in Central Anatolia, in 1906.

Here’s a sample of the text as translated by Anthony Dent from the French translation of the original by B. Hrozy:

Day 4. Pace two leagues in morning, one at night. No water all day. Grass at night.

Day 6. Wash five times in morning, graze in afternoon and wash once. Repeat for four days.

Day 12. Keep in stable all day. Feed only grain and cut grass. Repeat for 10 days.

Day 48. Stand up all day. One handful of grass mid-day. Evening, pace half a league. Water and grass at night.

The training methods were utilized by Dr A. Nyland in 1991 during research for her book, The Kikkuli Method of Horse Training. She advocates, “A 3000 year old fitness program for horses offers modern trainers a way to improve horses’ fitness while keeping them sound and happy. By following the instructions in the Kikkuli Text, you will be able to produce a superb equine athlete.” On a side, I am loving this cover photo.  The book was published in 2009, but the image looks like something straight out of 1972.

What do you think, Horse Nation? Are you willing to give it a try? Give me a shout in the comments!

Kikkuli Text sample courtesy of International Museum of the Horse. Photos courtesy of The Works of Chivalry. Further Reading.