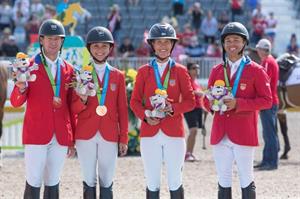 With just one rail dropped apiece in the first round, the four riders of the US show jumping team finished the second round clear to place a respectable third in Thursday’s Nations Cup.

From the USEF Network press release:

Caledon, Ont. – The final team medals in equestrian competition at the 2015 Pan American Games were decided this afternoon with the U.S. team taking the Team Bronze medal. The Nations Cup proved extremely competitive over both rounds of competition with clear rounds coming at a premium. The team comprised of Georgina Bloomberg, Kent Farrington, Lauren Hough, and McLain Ward finished on a total of 12 faults. The home nation of Canada won Team Gold on seven faults and Argentina took home their first team Pan American Medal in decades – a Team Silver on eight faults.

The U.S. Team got off to an unlucky start in round one, with each combination having one rail down on-course to go into round two sitting in sixth on 12 faults. The team entered the arena for round two determined and performed an impressive four clears, a feat not matched in either round.

“Coming back and having four clears in the second round was a great testament to all four of them, we are all proud of the effort, and it has been a great event,” said Chef d’Equipe Robert Ridland. “Each [U.S.] round of round one had one extremely minor error, not one single major error. It was pretty simple what the team needed to do [in round two]: duplicate everything from the first round and fix that one problem, and that’s exactly what happened. They were brilliant in the second round.”

Ward (Brewster, N.Y.) and Sagamore Farms’ Rothchild served once again as pathfinders for the U.S. Coming into the first double combination on course at 4A, Rothchild had a light touch behind to knock the rail, resulting in four faults. The veteran pair jumped an otherwise excellent round and adjusted in the second round to turn into the first of four clear rounds for the U.S. in round two.

“I actually thought he jumped as well in the first round, if not better, than the second round,” said Ward. Speaking to the rail down in round one, Ward said, “[Rothchild] lightly touched it behind, he didn’t make a big mistake. I could have set it up slightly better, but again, it was not a big mistake. Unfortunately, the rest of the day went like that: all four horses and riders went well with just a little thing here or there, but in Nations Cup format, four faults can be deadly. You have to have perspective though; all the horses went well, all the riders rode well, and there weren’t any big mistakes or problems.”

Competing in her first championship, Bloomberg (New York, N.Y.) handled the pressure and proved her mettle. With a block down off the wall at fence six in round one, Bloomberg and Gotham Enterprizes, LLC’s Lilli, jumped an otherwise perfect two rounds. The Michel Vaillancourt-designed course had a tight time of 83 seconds allowed, leaving no room for error. Bloomberg and Lilli came through the finish times in a neat 83 seconds, to post zero faults in round two.

“The first round I was really concerned about the time allowed, she’s usually a bit of a slow horse so I am always concerned with the time allowed, even when it’s not incredibly short like it is today,” said Bloomberg. “I think that watching a lot of people have time faults, I really had that in mind and think that’s why I had the wall down; I was really moving, came around the turn, and went.” Going into round two Bloomberg explained her mindset, “In the second round I was thinking: I still have to be somewhat quick, but I really wanted her to take a deep breath in every corner. If I had a time fault, I had a time fault, but at least I don’t make the same mistake as I did in round one. I had 83 seconds to do it, and I used every bit of it.”

A veteran of Olympic and Pan American Games, Hough (Wellington, Fla.) piloted The Ohlala Group’s Ohlala in the mare’s first championship competition. Picking up four faults at the entry to the triple-combination at fence 9A, the combination returned in round two to turn in one of the fastest clear rounds of the day.

“We were all a bit disappointed with the first round, little margins of error,” said Hough “[Ohlala] put in two fabulous efforts and I corrected my mistake in the second round, she couldn’t have jumped any better.” Hough’s clear marked three clear rounds in round two, assuring the U.S. of a 12-fault finish. “We all really dug in; it was a good experience for all of [the horses] and hopefully we will come back strong for the individual round. We are all quite experienced riders and knew we had to come back and be just that much better and we did it.”

Farrington, currently ranked third in the world, brought his and Robin Parsky’s young, talented mare Gazelle to gain valuable experience in the mare’s first Nations Cup. The pair had the same rail down as Hough at 9A and also added one time penalty to their total in round one. The mare built on her experience and produced a confident, faultless effort in round two.

Speaking to the success for the U.S. team at the Games, Farrington (Wellington, Fla.) noted, “[Gazelle] is nine-years-old and this is the biggest course she’s ever seen in this kind of setting. Additionally, Georgina is here doing her first championship, so I think it was great experience for an inexperienced horse and for a rider moving up to compete in her first championship. Obviously we came here to be competitive and have a very strong team. We all had an unlucky rail in the first round, but all came back and jumped clear in the second round. A little bit of bad luck today, but overall a good experience.”

We’ll continue to bring you results and coverage of the Pan American Games here on Horse Nation for Saturday’s individual finals!