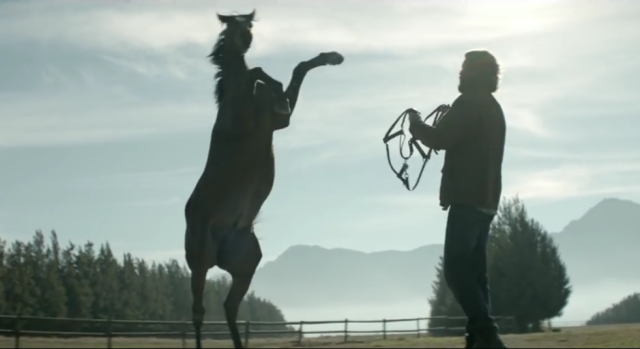 As an aside, commercials are getting really, really elaborate these days. This one from Nedbank will pull at your heartstrings!

Nedbank, a large South African banking firm, recently released this sweet little commercial with the tagline “amazing things happen when you partner with the right people.” The commercial tells the story of an owner who loves his young horse but doesn’t know how to train it properly; he teams up with a trainer who is able to unlock the horse’s potential. When the horse hits the track, well … I’m sure you can guess what happens next, or you can watch the commercial:

D’awwww. And if that 45-second version warmed your heart, then you’ll really love the extended version. (Extended version? Yeah, I meant what I said before — commercials are getting awfully elaborate these days.)

Sniff. There’s nothing that chokes me up faster than a dramatic equine success story encapsulated in a three-minute long Jose Gonzalez song.

The commercial was a pretty elaborate process, thanks to seven months of liberty training for the six horses that played the role of the star equine, from foal to racehorse. The entire process, from creative team to final shooting, is explained through this “making of” video:

Hey, the extended commercial is only three minutes long and it’s still a better story than a lot of movies we’ve seen. Kudos to the entire team that produced “The Reins!”