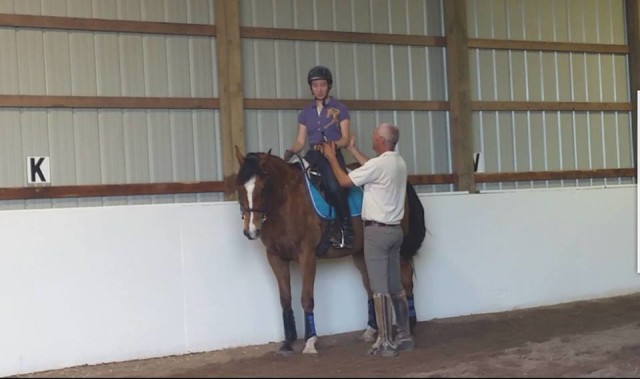 Angela Keller and her horse Tai participate in an Angelo Telatin Clinic at Hill and Dale Farm. Photo courtesy of Melanie O’Neill.

Equitation science promotes an objective, evidence-based understanding of the welfare of horses during training and competition by applying valid, quantitative scientific methods that can identify what training techniques are ineffective or may result in equine suffering.

The key to all of it is the SCIENCE part. Remember the scientific method that you learned about in high school? They apply that to horse training and also horse keeping.

For instance they no longer accept any kind of dominance theory with horses. Studies of horses in a natural environment show that there is no ranking in mares and geldings. So there is no “alpha mare” — there may very well be an aggressive mare but not a dominant one. This is hard for some people to accept, but new discoveries in science often are. These are peer-reviewed, journal-published works, conducted by trained behavioral scientists. As Neil De Grasse Tyson said, “The good thing about science is that it’s true whether or not you believe in it.’

The science part of training primarily comes through the application of psychological concepts of learning theory to horses. This is something we all have a basic understanding of but often fail to use in training.

Think about Pavlov’s dogs and conditioning. To simplify, a stimulus leads to a response. Apply pressure on a rein and the horse stops. In learning theory we use what is called negative reinforcement. This sounds bad but it is not; it is not punishment. Apply a pressure (pull on rein) get the desired response (horse stops) then release the pressure (loosen rein). Horses aren’t born knowing that pressure from a rein means stop. Someone early on conditioned that response in your horse.

If you think about it we use negative reinforcement all the time as we ride and work around horses. Leg means go, right? But we apply the leg, horse responses with a faster gait or up a gait and then we release the pressure of the leg. The better you are at training your horse (conditioning a response) the lighter your aids can become. If your horse is dull off your leg, what do you think you need to do?

The desired outcome of using learning theory for Equitation Science is horse welfare. So they study how stressed a horse is when being worked. They look at things like heart rate and blood pressure as well as outward behaviors like sweating, wide eyes, grinding teeth. One of the key aspects is to never cause fear in the process of training a horse. Checking for relaxation is central tenet of Equitation Science. Something that has come out of the research is that horses prefer to be scratched instead of patted for a reward. Scratching at the base of the neck has been shown to lower heart rate.

In the past few months I was able to attend clinics with two equitation scientists. The first was Dr. Andrew McLean from Australia. He is vice president and co-founder of the International Society of Equitation Scientists (ISES). His educational background is in neurobiology but he is also a longtime horse trainer and eventer. He was at Rhythm and Blues Stables in New Jersey.

It was a wonderfully small clinic with lots of interaction and time for questions. When he worked with the horse and rider, the first thing he did was check the stop and go buttons. In hand first, he would ask a horse to move forward and check for a prompt move off. If the response was slow he would tap with the whip. Then he would ask the horse to stop. If the response was slow or heavy he would have the horse back up a step. He asks them to back by tapping with the whip on one leg. All riders said their horses felt more responsive to the aids after the in hand tune up.

Dr McLean also teaches “park” or stand while in hand. When he leads a horse he wants them to go forward or back with an aid, not just follow you. He teaches a horse to park by having the horse stand and the handler takes a step. If the horse takes a step he has the horse back, if he moves just one foot he uses the whip to tap that foot back. Timing and consistency are crucial in all training and it becomes really obvious when working on these small aspects.

The second clinic was with Angelo Telatin who teaches in the Equine department of Delaware Valley University in Doylestown, Pennsylvania. He is on the council of ISES. He is best known for his bridleless jumping demonstrations. I have known Angelo for few years but most recently I went to a clinic and lecture at Hill and Dale farm in Ottsville, PA. He gave a lecture on basic learning theory. He works with a lot of horses on fear or bad behaviors. He says if you do something with a horse 3 times you have taught him something – for better or worse. He showed a video of a horse that acts very badly at feeding time, kicking and biting in the stall. This was probably taught inadvertently by feeders. He taught this horse to touch a ball to get the food. Then the horse had to touch the ball every time before he was fed.

Equitation science is not a training method. It is more a group that encourages research and scientific study in working with horses. Both of the clinicians I saw have different “methods” but use the same science. Also what I liked about them both was that they are open to other ideas and willing to try things. It is an exciting time for ISES because they are having their international conference next month in Vancouver, BC Canada.

Research is presented by many scientists from all over the world. Key speakers include Andrew McLean and Hilary Clayton. This is the ultimate experience for science nerds like me; unfortunately I won’t be going. Hopefully there will be lots of media coverage, if not in this country then in others.

About Melanie: I’m an event and dressage rider from Bucks County, PA.  I teach equine nutrition at Delaware Valley University in Doylestown.  I also organize dressage shows at Bucks County Horse Park and work at veterinary clinic. I have my own business for riding lessons and training as well as equine massage, fecal testing and nutrition consultations.  I am married and have 3 sons.