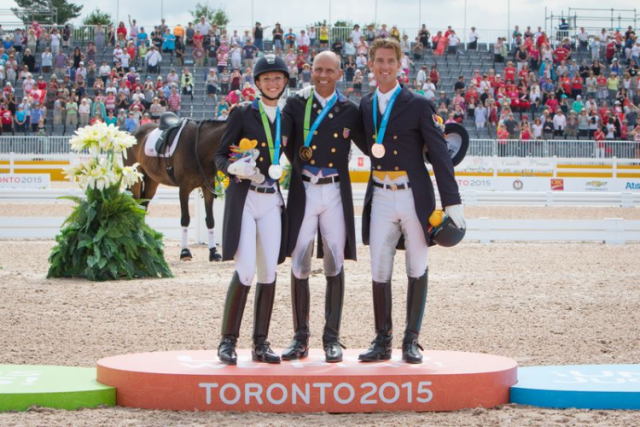 The broadcast mess that is the Pan Am Games is currently sharing its only equestrian live stream, for those of us lucky enough to already be subscribing to a few networks.

No really, we promise this actually happened. (FEI/StockImageServices.com)

By now, you’ve probably realized that there’s virtually no way to watch the 2015 Pan American Games. You’ve just been taking our word for it all week long that the United States teams have been kicking butt and taking names, capturing individual and team gold medals and earning their tickets to Rio for the 2016 Olympics. (Really, we could be making it all up. I promise you that we’re not.)

After likely sifting through scores of angry Facebook comments and irate emails, the long-suffering CEO of the United States Equestrian Federation (USEF) Chris Welton released a statement last week explaining that, unfortunately, because of the Canadian Broadcasting Corporation or CBC winning the bid to be the sole broadcaster of the Games, there would be no live stream available on any other network. Because the CBC decided only to show a few hours of preliminary qualifying rounds of the show jumping on Tuesday, today’s Nations Cup and Saturday’s individual finals, we’re in the dark as to just how Legolas rocked his dressage freestyle or how Marilyn Little continued her personal domination of Canada. You can stop refreshing the USEF Network home page now — it just ain’t happening.

Fortunately, we can console ourselves that we do get access to show jumping. But even this stream comes with strings attached: the CBC live stream broadcast is only accessible to those within CBC’s broadcast area (which rules out most of us “south of the border.”) ESPN3 was green-lighted to stream today’s equestrian events as well, but you have to be a subscriber first to get access in the first place.

So if you are like me and don’t have any access to the live stream at all, we’ll just have to continue refreshing Twitter and Instagram and keep scanning for press releases and headlines to track the US show jumping team’s progress as they compete for top honors in today’s Nations Cup. We’ll bring you the news as fast as we can find it here on Horse Nation.

In the meantime, go riding!