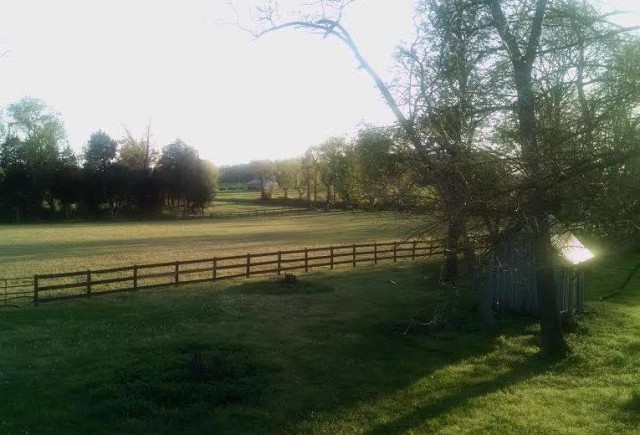 For an application fee and a dazzling display of words, you could win the farm of every horseman’s dreams.

Pristine green paddocks with new fences. Historic barn wood throughout the property. More than two miles of groomed riding and driving trails. Absolute tranquility just minutes from the edge of the Rappahannock River in the middle of the rolling Virginia countryside. And it can all be yours if you’re willing to write your pants off and pay your share into the lottery of destiny!

Randy Silvers and Carolyn Berry have owned the beautiful Rock Spring Farms in Hustle, Virginia for many years, and have turned the once run-down property into a slice of Heaven, but ultimately had to make the decision that they couldn’t stay. According to their website, Randy is 63 and battling rheumatoid arthritis, and knows that the property is more work than he can sustain indefinitely. So rather than selling it to whichever Joe Schmoe was the highest bidder, the couple decided to pass their dream on to someone who sees the magic of what they’ve done at the historic property.

View from the front porch of the main house. Photo courtesy of the Rock Spring Farms Facebook Page.

The farm, originally founded in 1726, has numerous human-related structures: a main house built in 1996, a 2-bedroom cottage, a 19th century cookhouse, a recently added woodworking shop, a shed, and an equipment barn.

The main house at Rock Spring Farms. Courtesy of the farm’s Facebook Page.

But more importantly to the horse folks, it also has a five-stall horse barn with a second-story hayloft, as well as a carriage barn for the driving enthusiasts. The couple also carefully installed and maintained beautifully groomed trails which wrap the property and wind in and out of the wooded and uncultivated portions of the farm. According to the website, about 25 of the 35 acres are mature wooded forest land, and the other ten are open land: pasture, paddocks, lawn or occupied by buildings.

Randy and Carolyn taking a winter sleigh ride at the farm. Photo courtesy of the Rock Spring Farms Facebook Page.

The barn has a rustic but sturdy interior, and when Randy tore down the dilapidated home built around the turn of the century, he salvaged the staircase to use in an expansion of the barn for accessing the hayloft. Those stairs are one of many labors of love performed by the owners over the years, and it’s clear that Randy and Carolyn’s intentions are to keep the magic and joy of their farm alive in someone else’s dreams.

Each building has a different story and chronology that poignantly tells the tale of America, Virginia, and of Randy and Carolyn, as well. The couple, both previously widowed, found new love and hope together and married five years ago. The farm is a meaningful chapter in both their lives, but as Carolyn explains, she and Randy “would like to start a new journey”. Now the key was finding just the right horse/farming enthusiasts to love every building and every trail the way that they had.

“Randy pounded every fence post into the ground and nailed every fence board to those posts,” Carolyn writes.  “The thought of strangers traipsing through the house . . . nitpicking every flaw was too much for him to consider. Perhaps an essay contest would appeal to people who would love the farm as much as we do.”

View from the front porch of the main house. Photo courtesy of the Rock Spring Farms Facebook Page.

To enter the contest, dreamers must be willing to fork out a $200 application fee and write a 1,000 word essay on why they would like to win the farm, and what they would do with the property. Randy and Carolyn hope to get 5,000 applicants, which would cover the remaining mortgage on the farm, allow them to purchase a retirement home, and assist with their grandchildren’s college tuitions. The couple has consulted with lawyers, and the contest is completely legal (though they reserve the right to return the entry fees and cancel the contest if they receive an insufficient number of entries).

Essays are due October 1st, and the winner will be announced on or before November 26, 2015. A lawyer will strip down the essays to make them anonymous, Randy and Carolyn will read all the essays and narrow it down to 25, and then an impartial trio (a teacher, a horse enthusiast, and a hobby farmer) will make the final selection. Those interested in entering the contest should visit www.rockspringfarm.org and the contest’s Facebook Page for more information and entry instructions.