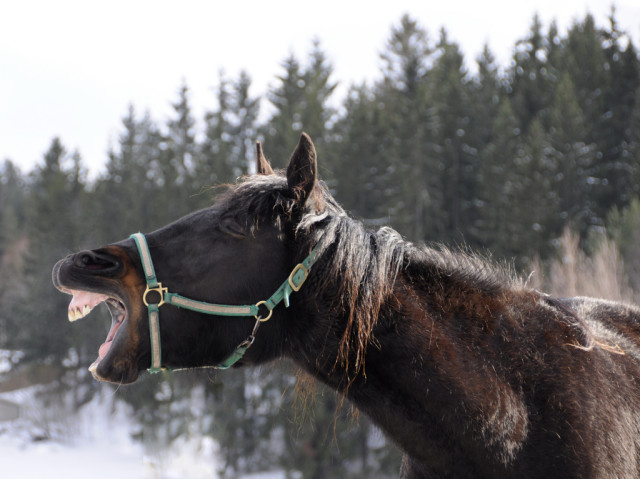 We always thought horses had the five common senses — but it turns out that they actually have TEN. Maria Wachter has the scoop.

In the mythical world of hobbits, unicorns, flying dragons, dwarves, elves and sorcerers, all the creatures have magical talents or abilities that us mere human-folk lack. How cool would it be to have an ability to breath fire, cast a spell, read minds, dance in the clouds or just be able to walk under a table without bending over?

Yes. That’s exactly what I was thinking of.

Well, wake up you silly human! You aren’t living in fairytale land! You’re living in a land of working forty-plus hours a week, a land of traffic, smog, divorce, back-talking kids, Twitter and Facebook. This is reality. Fortunately for us, we can own one of these magical creatures: we can own a horse!

A horse, surprisingly, has ten senses — five more that us human-folk. It hasn’t been documented or talked about. Most people like to keep it hush-hush, but I am here to shed light on the horse’s amazing abilities. Let me go over all the senses of the horse:

1. Sight: Just like humans, horses can see with their two eyes. But unlike humans, horses have the ability to see things that aren’t there. Horses can see dead people. Yes, the reason your horse spooked at that bush was because a dead person was hiding in it. The reason your horse spooked at that plastic bag was probably because a dead person was shaking it in the wind. Horses are not a big fan of dead people — but some like dead people more than others. If your horse is spook-proof, it’s probably because dead people come every night and give him treats.

2. Hearing: Also like humans, horses can hear. They have two ears to hear a whole bunch of different sounds. They can hear a dog barking a mile away, a snake slithering in the grass and the sound of the grain bucket being carried down to their paddock. But unlike humans, words like “WHOA” and “STOP DOING THAT, DARNIT” ring on deaf ears. It’s believed that their ear canals are designed to not pick up their own owner’s voice, unless food or treats are involved.

3. Taste: Horses have tons of taste buds, just like humans. They can taste a variety of different flavors. They love the flavors of apple, peppermint, hay and oats. Sometimes they even love the flavor of their own manure or sand. But the one flavor that all horses hate is the flavor of bute. Bute can be hidden in an apple flavor or peppermint flavor, but horses aren’t dumb creatures and are not going to eat poison, even disguised. They also dislike the flavors of expensive supplements, wormers and antibiotics. They prefer first to put the disgusting flavors in their mouth and that spit them out all over the human.

5. Touch: Horses can have the ability to feel. They can feel a fly land on their back, an itchy cinch that must be rubbed into every tree they see on the trail, a massage from their weekly massage therapist or rain falling from the sky when they don’t have their blankie on. But unlike humans, there are some things they cannot feel. They cannot feel their feet when they “accidentally” step on your boot. They also cannot feel your spurs when they are being schooled. It’s believed that their ability to feel goes away for a brief moment when they sense that their brain is being overloaded with nonsense from a human. This ability allows them to grab the bit and run back home when they’re tired of whatever was annoying them on their back. It is basic self-preservation.

6. Mind-reading: Horses can read your mind. That’s why when you have the vet scheduled out for a visit, you will find your horse in the furthest part of the corral. When breakfast is about to be served, your horse will be patiently waiting for you at the gate. They are very remarkable creatures!

7. Weather prediction: Horses can predict the weather. Before any major weather change you horse will colic. You can tell how cool and crisp it will be by how many times your horse rolls and thrashes on the ground.

8: Flight: It might be only sustained for a brief moment, but horses are descendants of the Pegasus, and Pegasus could fly. You will see typically first see this ability the first time your horse comes to a creek crossing on the trail or sees a snake cross his path. He will try to fly right out from underneath you.

9: Reasonability: Horses like to reason, especially when it’s in their favor. Make sure you bring this sense to fruition by always doing everything in their favor.

10: Invisibility: Horses have the ability to make things disappear. Put a fly mask on them and turn them loose and see if you ever will be able to find it again (at least in one piece.) They also have a most outstanding ability to make your money disappear.

Now that you know the truth about your horse, make sure you treasure him like the amazing, magical creature he is!

Well-played, Maria! Thanks for sharing. If you enjoyed this post, be sure to follow Blackman Ranch on Facebook here for more “call-it-like-we-see-it” musings on the nature of horses and horse people. Go riding!