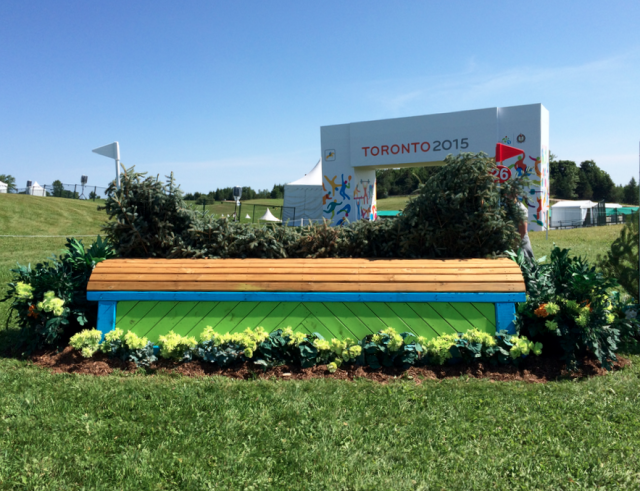 The USEF breaks down who’s playing and what’s at stake for Team USA at the Pan Am Games eventing competition, which kicks off this morning in Toronto.

The Pan American Games eventing dressage competition is just underway and HN’s sister site Eventing Nation is live on the scene to keep us posted on all the latest updates. In the meantime, here’s a breakdown of who is competing and why the weekend matters via an edited USEF press release.

Caledon, Ont. – Equestrian competition at the 2015 Pan American Games continues tomorrow with the start of eventing. A total of 13 countries with 43 combinations will participate, including 11 teams. All U.S. horses passed inspection this afternoon and the U.S. has drawn last in the order for Friday’s dressage phase. The U.S. team will ride in the following order:

A top team-placing will be particularly important to the U.S. Eventing Team as they strive to qualify for the 2016 Olympic Games in Rio de Janeiro, Brazil. The U.S. can secure its berth to the Olympic Games by placing as the highest ranked nation not already qualified. Team Canada has qualified, as has Brazil as the host nation.

“We have a very experienced group of riders. Even with two new riders on the team, they have ridden for the for the U.S. in the past and have many horses at broad levels of competition,” said Chef d’Equipe David O’Connor. “There is great respect among these riders for each other so the camaraderie is very good. We need an absence of bad luck, there is no question, but we are very much looking forward to them being able to do thing we know they can do, and to have it happen this weekend. That has been the goal, to have that level of performance that they have all had, consistently, and have it now.”

The Caledon Equestrian Park in Caledon, Ontario, will host a strong contingent from the U.S., including Phillip Dutton, Lauren Kieffer, Marilyn Little, and Boyd Martin.

Dutton, West Grove, Pa., will compete on the talented 10-year-old Fernhill Fugitive, owned by Thomas Tierney and Ann Jones. Dutton is the most seasoned member of the squad, having competed in five Olympic Games, three for his native Australia and two for the United States. He is also a veteran of the Pan American Games, participating in the Team Gold effort at the 2007 Pan American Games in Brazil where he also won Individual Silver on Truluck. With the Irish Sport Horse gelding, Fernhill Fugitive, Dutton has enjoyed a long and successful partnership. In 2015, they had top-ten placings at the Cloud 11-Gavilan North LLC Carolina CIC3*, The Fork CIC3*, and at the Rolex Kentucky Three-Day Event presented by Land Rover, the gelding’s first CCI4*.

Martin, Cochranville, Pa., is also a veteran of international competition, having represented the United States at the 2010 and 2014 Alltech FEI World Equestrian Games, and at the 2012 Olympic Games. Aboard Pancho Villa, a 12-year-old gelding owned by the Pancho Villa Syndicate, Martin has had successful placings this year at both the Fair Hill CIC3* where he placed second, and the Jersey Fresh CCI3* where he placed third.

Kieffer and Little make their debuts in international games eventing team competition as members of the U.S. Pan American Eventing Team. Kieffer will pilot Meadowbrook’s Scarlett, an eight-year-old Thoroughbred cross mare owned by Marie Le Menestrel, with whom she has had continued success. The pair has had top placings recently in the Jersey Fresh CCI3* and the Cloud 11-Gavilan North LLC Carolina CIC3*.

Little will compete on RF Scandalous, a 10-year-old Oldenburg mare owned by Raylyn Farms, Inc. and Phoebe and Michael Manders. Together RF Scandalous and Little have won their last five international events, including most recently the Cloud11-Gavilan North LLC Carolina CIC2* and the Ocala Horse Properties CCI2*.

With a promising blend of talented athletes and horses, the U.S. Pan American Eventing team holds high hope for success in the 2015 Pan American Games.