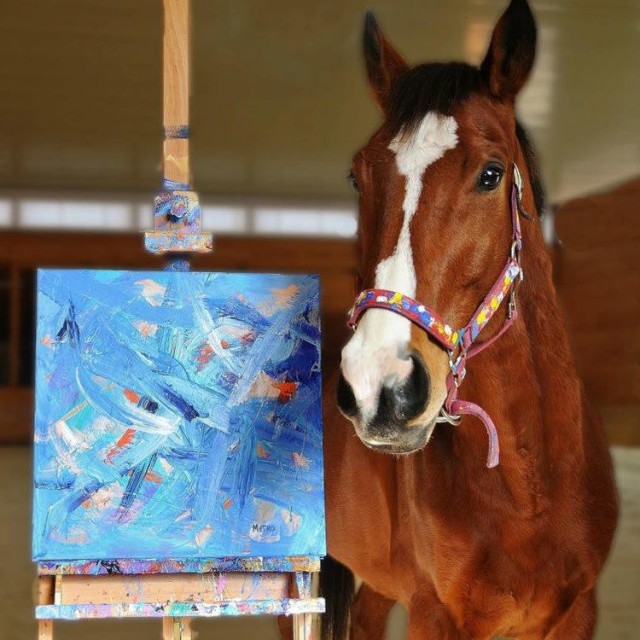 This week’s round of applause goes to Metro Meteor, the painting ex-racehorse.

Each Friday, Horse Nation teams up with Ovation Riding to spotlight an individual or organization that is doing good work in the horse world.

Thoroughbreds coming off the track don’t always have a bright future or a soft landing. Thoroughbreds whose racing careers come to an end because of injuries have even fewer prospects. One old soldier of a racehorse, however, is proving to the world that every Thoroughbred, no matter how battered, has plenty left to give even after their racing days are over — and he’s raising money to help more like himself. Meet Metro Meteor, the ex-racehorse with an unusual talent: painting.

Metro’s story is told in this video, originally featured on CCTV America:

To date, Metro’s owners Ron and Wendy Krajewski estimate that the horse has earned about $120,000 in artwork sales, with $60,000 of his earnings going to New Vocations Racehorse Adoption Program. New Vocations rehabilitates and rehomes Thoroughbreds coming off the track and is one of the largest Thoroughbred placement services in the country.

The rest of Metro’s sales fund his continued veterinary care: thanks to an experimental injection, Metro’s old racing injuries in his knees are healing and he’s actually improving rather than just forestalling the day in which the arthritis and bone chips would cripple him permanently.

While the concept of a retired racehorse learning a new skill in his “second life” isn’t a terribly unique story, Metro Meteor’s skill of choice makes him an unusual star among Thoroughbreds; because he’s attracted so much mainstream media attention, Metro has helped show the world that the ex-racehorse is a quality animal that has plenty of life left to live, and plenty of gifts to give as well.