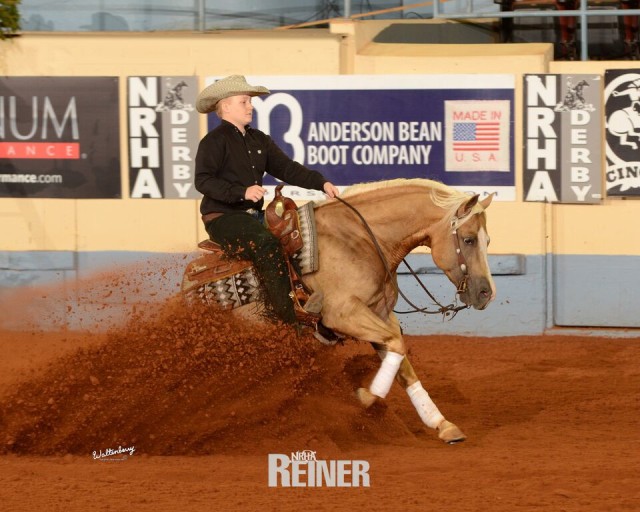 The latest superstar of the family, Cade, just made history at the NRHA Derby.

The McCutcheons just can’t stop, just won’t stop. They’ve won just about every prize that the NRHA has to offer as well as conquered the international FEI reining scene a la World Equestrian Games on two continents. Let’s recap this family’s achievements:

We could also mention that Mandy’s dad is none other than Tim McQuay, a living reining legend in his own right … and her mother is Colleen McQuay, a leader in the hunter industry.

And just when you thought that this family couldn’t possibly exceed expectations further, Tom and Mandy’s son Cade at age fourteen became the youngest rider to win the Level IV Non-Pro Derby in Oklahoma City in June:

Cade’s mount Custom Made Gun is owned by his grandfather Tim McQuay, and Cade credited Tim and McQuay Stables’ head trainer Sam Schaffhauser for prepping the horse. Cade beat out a huge class of seasoned competitors, mostly experienced adult riders, to make history with his 219-scored win. His mother Mandy won this class at age 18, but Cade’s got her beat by a good four years.

Whether Cade decides to stay non-pro or eventually go professional, this young man has a heck of a reining future ahead of him! We can see it now: a WEG reining team of Tom, Mandy and Cade in 2018. (Younger sister Carlee is starting to ride the reiners, but also shows pony hunters as well.)