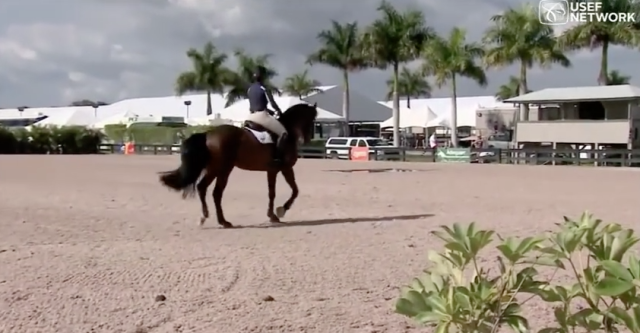 This week, things are getting a little bit sideways.

One of my favorite exercises of the 2015 George Morris Horsemastership program was Beezie’s half-pass trot to half-pass walk back to half-pass trot method. The exercise is tricky for a horse or rider that isn’t paying attention.  It’s something I do when my horse is “very concerned” about the boogie monsters in the woods next to my arena.  It refocuses his attention on the work.

We will up the ante on this exercise by adding a small cross rail. This exercise was originally described in Horse Journals by Liz Ashton. If Beezie’s exercise was tricky, this one is downright hard. Lemme be honest, I have yet to make this one pretty.

“After establishing a balanced, active working trot on the right rein, turn in off the rail along the long side of the arena and ride a half-circle, approximately 10 metres in diameter, to a low cross-rail. Ride over the jump and immediately upon landing (in left lead canter) ask for three or four strides of leg-yield to the right. Repeat the exercise on the opposite rein.”