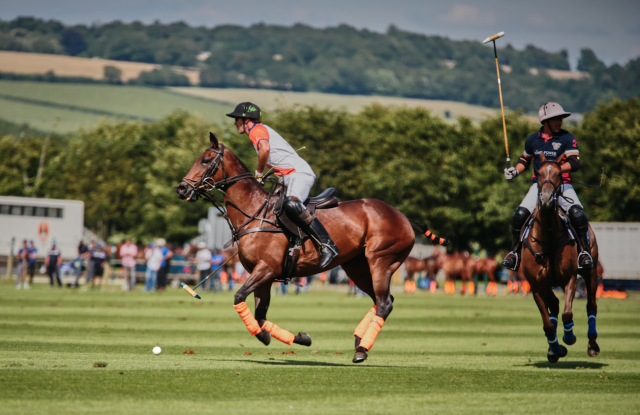 Nic Roldan is a potent combination of athletic ability and smoldering good looks … and we scored an interview.

Nic Roldan is a third-generation polo player who was born in Buenos Aires, Argentina and raised in Wellington, Florida. He trained almost daily from the age of five and began playing polo professionally by the time he was 14 years old. He won his first major title, as part of the team that captured the United States Open Polo Championship in 1998, at 15, ending the year by being named the Young Player of the Year. Now he is one of the top professional players in the world with an 8-goal handicap.

Outside of polo, Roldan previously held a sponsorship from luxury Swiss watch maker, Piaget, and modeled for the Wilhelmina agency. He was named one of Vanity Fair’s “10 Hottest Horsemen” and one of Town & Country’s “Top 50 Bachelors.” That last status may have changed recently as he has been linked to show jumping sweetheart Jessica Springsteen. He recently posted this Instagram message to Springsteen.

Roldan didn’t comment on the relationship, but he was more than willing to talk about his other two passions in life – horses and polo. Here’s the full interview.

I believe this is your third year competing in England during the summer. Tell us a little about why you chose to jump the pond and what that has done for your game.

Polo is very much a seasonal sport and as from May till the end of July the highest level of polo being played worldwide is in the UK it makes sense for me to be here. Plus since the trophies for the two main tournaments here (the Queen’s Cup and the Gold Cup) are missing from my trophy cabinet, I am keen to include them at some stage. It is a challenge getting established in a new country and especially to make sure I’m mounted well.

Every equestrian knows competing at high levels takes a small village to accomplish. Can you give us an idea of your team’s average day?

I usually start the day off by going to the gym. Then I’ll go and check in on the ponies at the barn followed by catching up with the grooms. In the afternoon I will either stick and ball, ride the horses or play a practice. As a rule we have team meetings the day before each game to work out our game plan and strategy, for polo is very much a team effort both on and off the field.

You have been quoted as saying your love for polo is “first and foremost about the horses.” Tell us about that.

Of course, polo is at least 80% about the horses and only 20% about the player. I’ve always loved horses and grew up around them. Each one is like a kid with its own character requiring an individual approach. In polo we deal with large numbers of horses but I can’t help but have my favorites. It for instance boosts one’s confidence immensely knowing you have the horses underneath you that make you perform well in a particular play.

Your mare, ME, was featured on Facebook. Tell us a little about her breeding and what makes her so special.

Yes, from now on each month I’m going to feature one of my horses, both from my present string as well as from the past. After all it’s only right they too get the spotlight, so make sure you keep an eye out for that.

ME is a one of the stars in my string. She is a stunning mare! I bought her from polo player Martin Estrada with whose initials (“ME”) she is branded, hence the name. He bought her as an unbroken 2 year old at a big thoroughbred farm in Ocala, Fl and trained her. He says that from day one she was always very willing to please, quick to learn and that he just had to show her how to use what she already had. Her athleticism is what impresses most. She’s proved to be very natural and shines as a horse I’m always excited to play. She definitely always makes a difference in the game.

She was also the inspiration for the Polo Gear Nic Roldan Elite Saddle. Can you tell us a little about the saddle’s revolutionary design and the research behind it?

Yes, we had great trouble finding a saddle in which ME was comfortable, she has a bit of an odd shape. As I said, horses are the basis for this game so I want mine to be as comfortable as possible so they perform to their best and in turn for myself to be in as prime a position as possible. Polo is different from other horse disciplines and the polar opposite from 3-day eventing where they use 3 saddles with 1 horse, whereas in polo we use 1 saddle with 3 horses. It’s simply impractical for us to have a saddle exclusively for each horse due to the numbers of horses we play and also due to the order in which we may play horses throughout the game. As I felt we could much improve on what was out there for the polo market, I approached Polo Gear and we managed to put a group of experts together including vets, chiropractors, top saddlers from showing and dressage allowing us to pick out the best points from each discipline aiming to make a great product. It took us over a year to test several prototypes but we got there in the end and I’m very proud of the end result. Plus the proof was in the pudding with ME winning a best playing pony award at the highest level of the game Stateside in the US.

Next you’re headed to Aspen. What are your goals there and for the rest of 2015?

I’m going to spend the summer in Aspen playing with the Ganzi family at Aspen Valley Polo Club. I can’t wait. They hold tournaments there each weekend and it’s a great way for people to combine spending some time in one of the most beautiful prime luxury holiday spots as well as play some great polo. It surely will be a blast so if you’re in that area be sure to come to a game however if you can’t make it, check out some of our games on ChukkerTV.

If you could change one misconception about polo, what would it be?

The stigma i.e. “snobbiness” that polo is the game of kings.

What’s the #1 thing a person new to polo can do to improve their game?

Definitely riding: getting riding under control is by far the most important element.

Where do you see yourself in five and ten years?

Hopefully at 10 goals: the best rating a polo player can achieve worldwide.

HN wants to send out a special thanks to Nic Roldan for taking time from his busy schedule to talk horses with us.

Correction: A previous version of this article stated, “holds a sponsorship from luxury Swiss watch maker, Piaget.” Roldan no longer has a deal with Piaget.