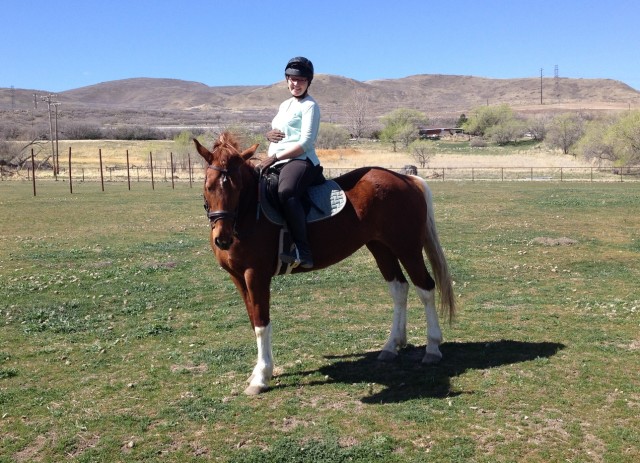 “If All Else Fails, Do As the Prison Inmates Do.”

I love getting to tell people all about Itxa’s amazing life story. I’ve mentioned it on HN often that her initial handling was done by prison inmates as part of a BLM work program that gives prisoners the chance to pick up some horse handling skills and the wild horses a chance to get gentled and adopted. They do a LOT of groundwork and desensitizing activities with them in the program; something I know because my horse came to me as a three-year-old fully equipped to do this the following year:

Certainly not the perfect Extreme Trail round, but pretty fabulous for an adolescent red-headed mustang mare born in the wild. (She was the only horse of 30+ in the competition to back the entire way through the hay bales, because she’s a baller, y’all.)

All of that has come in incredibly handy as Itxa entered the land of eventing, and to this day, she has never stopped at a fence in training or in competition. Thank you, inmates!

So you can imagine my utter shock and dismay when Itxa was coming down from full competitive work this past spring, and in one of our last outings before I gave up riding, she completely fell apart because of a newly stacked pile of tires near the conditioning track at our barn. Really? You will trot through a black plastic cave with a fog machine, but you’re suddenly afraid of tires? It was probably the closest I’ve come to being ditched in months, and it happened to be when I was about 24 weeks pregnant. Major reality check. I ended up dismounting and leading her over to touch her nose to the tires and do a little groundwork near the offending black monster, and that was that. It was all a small enough affair really, but it made me realize that maybe I was going to lose a lot more ground than I bargained for by not being able to ride.

It has proven to be a bit prophetic, as I daily notice little ways that my wild thing is slipping away from me, even as she is also rediscovering some of her own well-being. So what’s a now 38-weeks-pregnant woman to do?

Should you find yourself in this position, pregnant ladies, here is my unsolicited advice: When all else fails, do as the prison inmates do. For several months, as the inmates learn their way around horses for the first time, they spend absolutely no time in the saddle, instead starting their own education right alongside the skittish horse to whom they’ve been assigned. They do all the ground games you’ve probably seen: learning to lead, accept being touched, rubbed, and tapped by a training stick or flag, walking over tarps, playing in water, and crossing cavaletti. Only then do they get around to the saddle time.

So for $10 at the local party place, I made a couple cheap investments to help Itxa rediscover some of her previous confidence, and give us a fun, safe, and educational space to bond.

We started with a neon pink hula hoop complete with noisy swoosh beads inside, and as I predicted, she started out a bit skittish to the whole thing, which a year ago would have been shocking. But over the course of thirty minutes or so, she made leaps and bounds. (We were fighting daylight there at the end, my apologies for the less-than-ideal lighting!)

Just a few days later, I came back with what I thought would be the more challenging of the two projects: a shiny, reflective Fourth of July door streamer that I was certain would make her eyes roll back in her head. It could be that I just overestimated the fear factor, but I’d like to think Itxa did so well with the second experiment because she was in fact regaining some confidence lost during her bout with “pregnant mom negligence syndrome.”

Lorraine has been a regular contributor to Horse Nation since its inception in 2012. Her non-horsey but awesome husband Dan, her 5-year-old BLM mare Itxa, Australian Shepherd Rev, and stupid cat Jeoffrey live in the beautiful Rocky Mountains of Utah. They are stoked to invite another human into the Zoo in July, 2015. And because she gets this a lot, her horse’s name is pronounced EEE-chah, and yes, horse show announcers and organizers can and should hate her for her terrible horse name choices. See more of the family’s equine adventures and beyond on Instagram, @lorraine.jackson