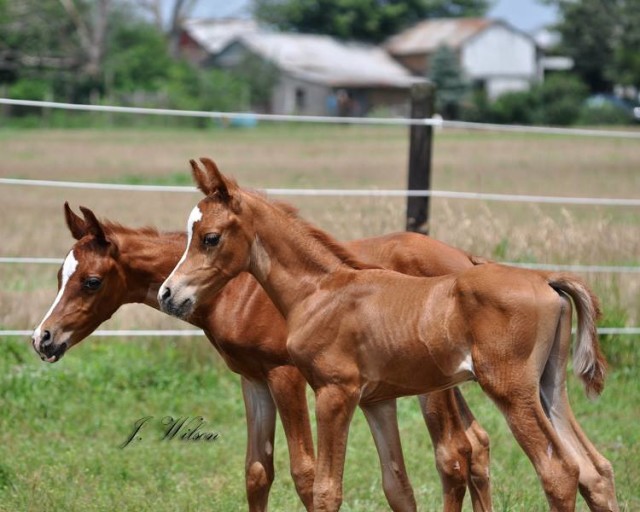 Buy one get one adorable, leggy, dishy-faced newborn! Learn more about these rare twins who defied all odds.

For a mare to become pregnant with twins is not uncommon, and for twin foals to survive to term is rare, but the nature of the birth of Arabian colts Majus ZF and Majician ZF is particularly unusual: they shared a single placenta in the womb.

Jennifer Wilson has been breeding Arabian and half-Arabian show horses at her own Zenith Farm since 2004. She has never before had a mare become pregnant with twins, and this scenario was definitely unplanned.

Majus and Majician’s dam, PA A-Magic Moment, was bred to the champion Arabian stallion Majd Al Rabi late in last year’s breeding season. She was confirmed in foal 18 days later, and the sonogram showed a single viable embryo and no sign of possible twins. Had they seen twins at that time, one of them would have been “pinched off.”

“We always try to be responsible. Twins are usually an absolute disaster for babies at best and at worst for the mares as well,” Jennifer said.

She opted to skip a 30-day heartbeat check because she would not have re-bred the mare so late in the breeding season if the pregnancy was lost. It is unlikely, however, that two heartbeats would have been visible because the foals were positioned so closely in a shared placenta.

Fast forward 10 months, and PA A-Magic Moment never appeared to be suspiciously heavy. In fact, throughout her three previous pregnancies, she maintained her girlish figure.

In early June, the mare was visibly uncomfortable, had gone off her feed and had been waxed up for a week. On the night of June 17, there were no changes, and Jennifer, who was seven months pregnant herself, was exhausted.

“I said I’m not even doing a foal check tonight. I’m so tired, there’s been no change, she’s not going to do anything.”

Well, you can probably guess what happened next.

The following morning, Jennifer stood at the stall door, incredulously counting: 1, 2, 1, 2, 1, 2. “They stood up. They were both nursing. It had been several hours.”

The foals were dry and the dam showed no signs of distress. The single placenta Jennifer removed from the stall looked normal. Even her vet didn’t feel the need to rush out to examine the foals or the mare. “The was no tearing, no complications. The post vet exam looked great.”

“Considering she did it on her own, I’m glad I wasn’t there. I might have gone into labor myself!”

Three days later, the colts had stopped nursing and were suffering severe diarrhea. They were fading fast, and Jennifer had been advised to take the foals to the New Bolton Center for veterinary attention.

“The last thing I wanted was to put two weak foals on a trailer with a panicking mare and go all the way with no one to ride in the back and make sure they weren’t stepped on. I had my own two kids and my husband was out of town that night. It was an absolute nightmare,” Jennifer recalled.

But she had no choice. Late at night, in the pouring rain, Jennifer’s mother helped her load the trio into the trailer, and they started on a harrowing 70-mile journey to the hospital.

“There was a music festival that had been evacuated because of the rain…The wipers went out halfway there and were not back until we were 10 miles from New Bolton…It was definitely divine intervention that got us there in one piece.”

Majus and Magician spent the next ten days at New Bolton receiving treatment for a bacterial infection that had been passed to them through their mother’s milk. “They ended up being [born] 11 days early and a little bit smaller than the average foal. It was just a little bit more than their systems were able to fight off on their own.”

While at New Bolton, the BOGO colts gained a following on social media as more people learned of their miraculous births and fight to survive a deadly illness.

Thankfully, they have recovered and are thriving. They are nearly three weeks old now and are at home doing what foals do: eating, sleeping and growing.

The boys are looking good this morning! They are getting to really enjoy their outdoor time. They are getting out a few hours in a row now. They are starting to nibble on grass and hay, so we will introduce the creep feed milk pellets this week. With luck, today will be their last day on antibiotics!! Majician is looking stronger every day now and is such a beauty. Majus is really growing like a weed, I think he will be normal size in no time. Legs on both colts are getting better and better. I expect the hind pasterns on Majus to take about another week or so considering he was on complete stall time with no turn out for those 10 sick days. Love these boys!!!

Posted by Majus and Majician – The BOGO Arabian colts on Monday, July 6, 2015

Twins from a single placenta are not necessarily identical, as the actual splitting of an embryo is extremely rare, Jennifer said. But Majus and Majician are very similar, both in size and color.

“Their markings are incredibly close. Horse clones even have slightly different markings; a combination of genetic and environmental factors that make markings settle where they settle. We’re leaning towards identical but we won’t know for sure until we do DNA testing.”

As they mature, their individual personalities are emerging. Majician is slightly smaller than Majus and less independent – “a total momma’s boy” – but both are very friendly and people oriented and will follow Jennifer around like puppies. They play together in the pasture some, she said, but their bond is far more evident during naptime.

“When they lay down to sleep, they’re on top of each other. They cuddle and snuggle and use each other as pillows. Majician likes to take one or two legs and prop them up on his brother, like he’s spooning a pillow.”

Which seems only fitting, as that may be a mirror image of their many months together in the womb.